Smallpox around the Haworth area

I recently was doing some research into Bancroft burials in the Haworth area of Yorkshire, and was stuck by the number of individuals, mainly children, who died from smallpox in the the late 18th century.

Smallpox was an infectious viral disease which was evident for centuries in places with poor sanitation, poverty, and malnutrition. Worldwide millions of poor people died, and there was no cure. By the end of the 18th century the disease was following the natural course, burning itself out on the human population, confining itself to those with the lowest immune capabilities.....young children and the old.

The village of Haworth, as most people know is the home of the Bronte sister, and far from the romantic image that all their writing conjures up, it was in fact a grim place to live in those times.

Much has been written about the appalling sanitation conditions in the village, before Rev’d, Patrick Bronte managed to get the authorities to do something about it, and these factors obviously had some impact on the mortality rates at that time, particularly amongst children.


Over 40% of children died before attaining the age of six years, and the school records from this time are testament to the poor health of local children with many dying from smallpox, measles, whooping cough and scarlet fever. The average age of death in the village was 25.8 years, which was about the same as in Whitechapel, St.George-in-the-East, and St.Luke, three of the most unhealthy of the London districts.

As the following page from the Haworth burial records shows in September/October 1794, smallpox was rampant in the area around this time. The records for this six week period shows 15 out of the 20 burials in this small village were due to smallpox, and nearly all were young children.

Shown near the bottom of this burial records page is the entry for a poor child of 2 years of age, Ann Bancroft, who was the daughter of William and Ann Bancroft.
William and Ann lived in a small isolated farmhouse know as ‘ Old Snap’ which is still there today on the outskirts of Haworth. Just surviving must have been a daily toil for William and his family, due to the rough moorland that surrounded them, were he scratched out a living as a hand loom weaver. I wrote an article about how life was for a hand loom weaver previously, which can be read here. 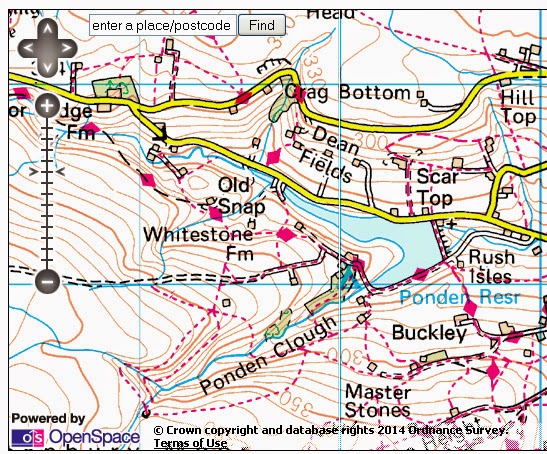 William married Ann Binns in 1785 at Haworth Church, even though where they lived was actually in the Keighley Parish area, most marriages around there took place at Haworth, because that was geographically nearer.
They had at least five children, Ann being their fourth child.
William is listed as a weaver in the Craven Muster Rolls of 1803, This was an important historical document produced in 1803, when England declared war against France and the threat of invasion by Napoleon made it necessary to prepare the whole of the active male population of the country between the ages of 17 and 55 for military training, but not military service. The purpose of the lists was to organise reserves of men, not already serving in the military services, who would be required to take on such duties as evacuation of the civilian population, moving food supplies and gathers arms and equipment in the event of an invasion.

William seems to have lived his whole life in the area around Old Snap, and died in 1823, and was buried at Haworth Churchyard, as the following parish record shows, written by the hand of Rev’d Patrick Bronte.

His wife Ann and family seem to have carried on living in the same area, but not at Old Snap, After William's death,  Ann is shown as living nearby at Deanfield as a servant with a farmer called Joseph Heaton…the Heaton family being the large landowners in the area at the time, and the owners of Old Snap farm, which the Bancroft had probably been renting from them.

Looking briefly at the history of Smallpox, various methods to find a cure were tried over the centuries which included warming and cooling the body, and using plant and herb mixtures made into an unpleasant jollop, but nothing seemed to be have been an effective cure which meant that only the strong, or lucky survived the disease. Smallpox was the first disease for which a vaccination was tried. It all started with Edward Jenner at the end of the 1700s. who found a vaccine which saved the world from the dreaded smallpox...a disease which had plagued the human race for centuries. Mass inoculation programs were instituted in many countries worldwide, usually backed by the government. The vaccine supposedly immunized people for life.
Edward Jenner was the English "physician" in the late 1700s who took note of an old superstition that milk-maids who got a mild disease known as cowpox supposedly didn't get smallpox. As an experiment, Jenner came up with the idea of drawing serum from an infected cowpox pustule on the skin of an infected milkmaid. He then injected the infected pus into a perfectly healthy person, on the theory that contact with this "milder" disease would allow the subject to develop immunity to the more deadly smallpox, his theory being  that this cow-pox is smallpox of the cow. Therefore, if you give a person cow-pox, it is the same as smallpox, only in a very mild form. And it would not be infectious.
However many people were suspicious of  what side effects, if any, could be suffered from having the cowpox vaccine, and this 1802 cartoon shows the early controversy surrounding Jenner's vaccination theory, suggesting the use of his cowpox-derived smallpox vaccine could cause cattle to emerge from patient's bodies, and titled " The wonderful effects of the new inoculation!" 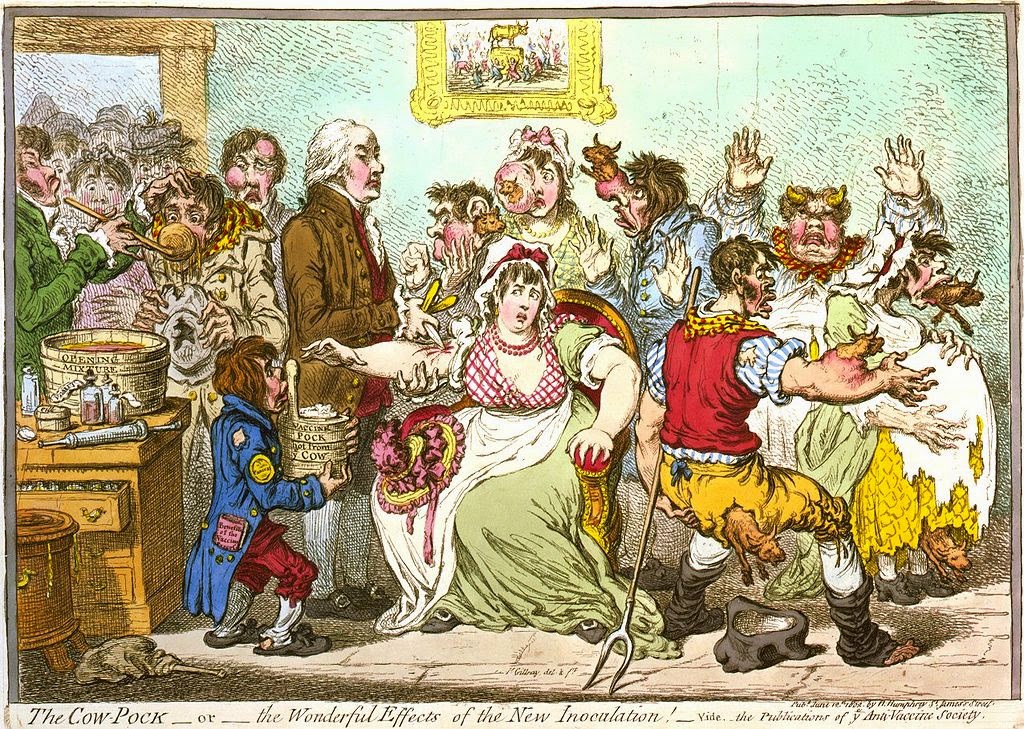 The vaccination was however very successful, so much so that by 1853, Parliament began passing laws to make the vaccine compulsory throughout the British empire. Other countries of Europe followed suit.

Locally there remained however much opposition to the vaccination and in July 1876 Thomas Harrison, a shoemaker of Glusburn, was brought before the Skipton magistrates court for failing to have his child vaccinated. A fine and costs were imposed upon him but when he failed to pay, he was sent to Wakefield Prison for one month’s hard labour. He was released on Saturday, September 4 and on his arrival at Kildwick and Cross Hills Railway Station he was met by a large crowd of supporters. They celebrated by launching a paper balloon with the effigy of Sir Matthew Wilson, the magistrate who had convicted him, drawn on it and then setting fire to it. The crowd then processed in triumph to the Friendly Societies Hall in Cross Hills where a substantial tea awaited them.

Support for Thomas Harrison had been widespread, particularly in Keighley where the Board of Guardians had refused to comply with the 1874 Vaccination Act that made them responsible for implementing the local vaccination programme. In August 1876, whilst Harrison was in prison, a Writ of Mandamus was served upon the guardians for their arrest and incarceration at York Prison. Two surrendered voluntarily and the others were rounded-up and taken into custody by the sheriff’s officers. They were initially held at the Devonshire Arms on Church Street but when the transport arrived to take them to Keighley Railway Station, they found their passage down Low Street was blocked by a large mob and so they set off via North Street and Cavendish Street. The mob took the shorter route and met them at the station where they unhitched the horses and pulled the guardians and their captors back to the Devonshire Arms. Despite verbal abuse and threats to throw them into the North Beck, the sheriff’s officers were eventually released unharmed and the next day the guardians surrendered voluntarily. They were taken peaceably by train to the prison at York Castle, the newspapers of the day excitably reporting that they were incarcerated in Clifford’s Tower.

Organised opposition to vaccination began to dissipate after a further act, the 1898 Vaccination Act came into force and introduced a conscience clause that gave parents who did not believe in vaccination the right to refuse.

It was however, not until 1977 that smallpox disappeared worldwide.
Email ThisBlogThis!Share to TwitterShare to FacebookShare to Pinterest