The Quarrymen of Cowling

The village of Cowling near Keighley was the home to many Bancroft families in the 18th & 19th century. Many were involved with the stone business and worked either in quarries in the area, or indeed actually owned small quarries on pieces of land they owned.
The building firm called "Bancroft & Gott" was set up by two families who were both involved in the stone business, and probably their greatest achievement was the building on the Methodist Chapel, on the site of a previous chapel, in Ickornshaw nr Cowling.
﻿
﻿
﻿ ﻿
﻿
﻿
Three Bancroft brothers, Smith b 1838, Isaac b 1846 and John b 1853 were all involved in the work which commenced in 1875.
Their time-sheets show a charge of five shillings per person per day against the hours spent by most of the stonemasons during the months from May 1875 to April 1876 when they were employed as stonemasons to build the new Chapel, and I list below a time and wages sheet taken from an old "Bancroft and Gott" ledger showing the hours worked  by Isaac Bancroft on the chapel and wages paid to to him.


The building materials were specified to be new ashlar in the native sandstone (or Millstone Grit) taken from neighbouring quarries. The old footings of the former Chapel  on this site were to be used where possible. Other parts of the old building were incorporated in the new building, such as the steps leading to the former Gallery being re-used for the entrance to the new heating apparatus room, and the best of the flags were re-used in the heating room, back kitchen and coal shute. Old stones from the previous building were re-dressed and used for the plinth to the new Chapel. The new stone was mainly from Earls Crag quarry, the bricks came from Colne and the lime from Lothersdale. 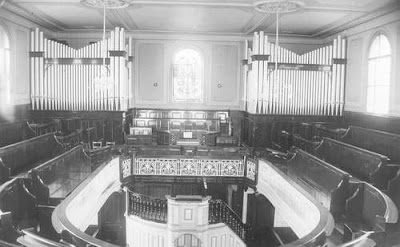 On the 8th July 1876 the new Wesleyan Chapel at Ickornshaw was opened and was described in the Keighley News as a "plain substantial building. The interior of the building was said to be very neat and well arranged, the entrance being from the side furthest from the road. There is a gallery all round approached by a staircase on each side of the corridor. It is seated for 500 worshippers, with open benches, and the pulpit stands in front of the organ and choir gallery. Underneath the Chapel is a school estimated to accommodate 300 Sunday School scholars, which is divided into three rooms, one large, and two classrooms."


The total cost of the building was £2,276 15s 7d and by the time of the opening the amount raised had reached £1,300. The first sermon preached in the new Chapel, on the Saturday afternoon, was by the Rev. W. O. Simpson of Bradford, and on the following day two sermons were preached by the Rev. J. Clapham of Sheffield. As not all the painting had been completed in the Chapel, services were conducted in the schoolroom for a short time after the official opening.
﻿﻿

The Chapel was eventually closed for worship in 1985, and converted to residential use as apartments, and the following picture shows it from the rear, as it is today.
﻿﻿ ﻿

﻿
The three Bancroft brothers, Smith, Isaac and John were the sons of James and Esther Bancroft who ran a 40 acre farm called Fairplace in Cowling. Their business partner in the building firm was Holmes Gott, and they had several other building project in the area.Smith died in 1890 and  Isaac died in January1900. The firm then continued as "Reddiough & Gott" who went on to do an important job of rebuilding Cowling Pinnacle in the early 1900's.
﻿﻿

Both Smith and Isaac lived with their families at a place called Farling Top, Cowling, which was originally a row of eight back-to-back terrace houses, and apparently the neighbours used to complain about the noise when the two brothers were dressing stone down in the cellars at night!  Evidence that both were involved with the building of the  Farling Top row can be found  because a plaque can be seen on the house wall which says " S & I Bancroft 1875". Shown below is a picture of Farling Top, or Farling Ing Top as it was known on old census records, as it looks today.
﻿﻿ ﻿

This final picture is a photograph of some Cowling Quarrymen working in an area of Cowling called Crag Delph, when a fossilized tree was discovered. The names of the men are not known, so it may be that there were some Bancrofts and Gotts amongst them.
﻿﻿

[I am grateful to The Moonrakers site of Cowling for some of the information in the article]
﻿﻿﻿
﻿﻿﻿
Email ThisBlogThis!Share to TwitterShare to FacebookShare to Pinterest

Good that the chapel ives on as somebod's home.