Bancrofts in the Sheffield Cutlery Industry

The Sheffield cutlery industry grew throughout the 17th and early 18th century and by the 19th century the trade was very large indeed, employing more than fifteen thousand people. In comparison, London, at it’s height only employed less than one thousand people.

Here were many Bancrofts families living in and around the Sheffield area in the 18th and 19th century who earned their living in the cutlery trade, working in very grimy workshops, in particular a Robert Bancroft who lived in the Stannington area of Sheffield.

The reasons for Sheffield area being the home of the home of the British cutlery industry are many, and are mainly because of it’s good natural resources. Five rivers flow from the surrounding hills into the area and powered the water wheels which drove grinding wheels for the cutlers. Coal was also readily available for smelting and forging and iron ore, for making the blades, was mined locally as well. Finally, nearby quarries provided the sandstone required for grindstones to sharpen and polish the cutlery. All these factors and the large number of water powered workshops gave Sheffield all that was required for a cutlery industry.
Another reason for the success of Sheffield’s cutlery industry was due to the way it was organised under a system of Guilds by the Lord of the Manor of Sheffield as the head. Unfortunately after his death in 1617, the guild system fell down, as nobody was able to take it over in a position of authority.

The Sheffield cutlets were so concerned by this disorganisation and the effect it was having on their livelihood, they presented a bill to Parliament to form a new controlling body, and an act was passed in 1624 forming ‘The Company of Cutlers of Hallamshire’ [which covered the whole of the Sheffield area]. Under this new authority the cutlery industry flourished, and although it lost it’s authority in the early 19th century, it is still around today and holds some very important records.

It is difficult to work out when Robert Bancroft [senior] was born because a search does not bring up a record of his birth, but it is clear that he was employed as a cutler, probably making pocket knives, in the Stannington area of Sheffield for all of his life, and his is listed as starting his apprenticeship in 1763 to an Ezra Couchin also from Stannington. There are also records listing him in the late 18th century in this occupation. One of these is his mark as a cutler: 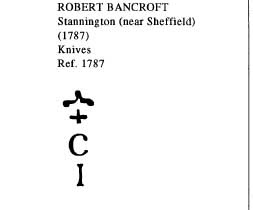 Also around this time the local trade directory for Sheffield and surrounding areas list him as involved with the manufacture of knives. 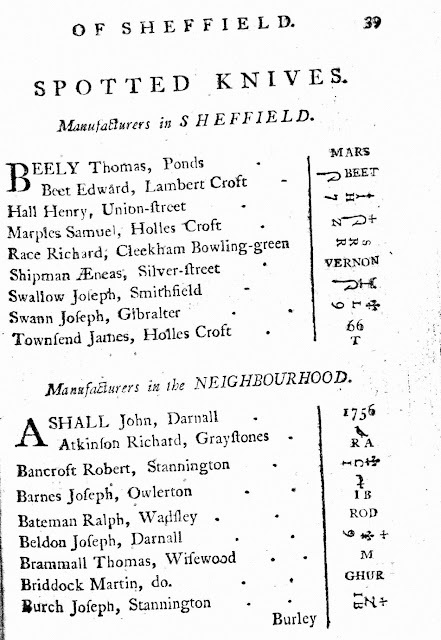 In 1799, the local authority records show him renting two separate pieces of property and land so we can assume he was probably employing men to help him with producing cutlery most likely employing his son Robert [jnr] 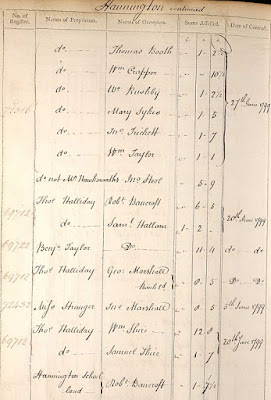 Robert [jnr] went on to work in the same trade as his father, and as previously mentioned, was entered as a freeman on the Company of Cutlers in 1797.

The occupation in the cutlery industry carried on throughout the 19th century by descendants of these Bancroft individuals. Robert [jnr]'s son Henry born 1825, is listed on the 1851 census, still living in the Stannington area with his wife and young family as a 'pocket knife maker and on later census's is a 'spring knife maker'


Unfortunately for Henry's family, life seems to have become somewhat difficult because by 1901 his son, also called Henry, ended up in prison for none payment of ' civil debts'. Interestingly Henry[jnr]'s occupation is shown on the prison record as 'Cutler' still living in Stannington which means he was the 4th generation of Bancroft families earning a living from the cutler industry.


It is interesting to see that all these generations of Bancrofts owed their livelihood to one industry and all continued to live in the small area of Stannington, on the outskirts of Sheffield, probably working in poor grimy conditions in small workshops such as  depicted by the following picture.