During the 1920’s and 30’s the lives of many people improved considerably with increases in real wages and  shorter working hours so it’s not a surprise that with more leisure time on their hands, the working man looked to new ways to spend his days off. Leisure activities such as rambling, and cycle clubs, where members would explore the beautiful Yorkshire Dales became popular and together with this, field clubs with a passing interest in caves and potholes started to gain popularity.

One of the most successful of these clubs was the Haworth Ramblers, where the members visited relatively ‘easy’ caves to explore such as those at Ingleborough , White Scar and Stump cross, and in July 1928 on of their leaders, Eric Bancroft from Denholme, near Bradford together with others, got to the bottom of the ‘Alum Pot’ to an area known as  ‘Dolly Tubs’. By the following year they crossed the 'Bridge' [as shown in the above photo] and penetrated another 185 meters to the bottom of the cave, using conventional rope ladders and lifelines, using magnesium wire and other illuminants for lighting.

The photo below shows Eric [right hand side, with arms crossed] and his father Victor [wearing flat cap] in Alum Pot circa 1930

The leader of these explorers was still Eric Bancroft, who by now was caving independently of the established pothole clubs with others. His father’s car and trailer were used to transport the necessary tackle to the various locations, and this unofficial group became known as the Denholme Pothole Club’.

By now the Alum Pot site was becoming overcrowded, with so many people wanting to explore it, so Eric and his friends turned their attentions in 1930 to the descended ‘Diccan Pot' which followed on from Alum Pot which had a stream in it, and which had inhibited exploration previously.

Previous attempts to descend Diccan Pot had been made by others as far back as 1902 by attempting to divert the water and by building a dam and aqueduct, but this had ended in failure.

Eric, assisted by others, returned to Diccon Pot in 1931 to try and overcome the problem of water hampering the decent and using a petrol powered winch, driven by a 2 cylinder JAP motorcycle engine from the 1920’s, manufactured by NUT company from Newcastle. The photo below on the left shows Eric on the left with his father Victor on the right, wearing the bowler hat, circa 1930.

There is no evidence that the winch was ever used in Diccan Pot. It’s real purpose was to assist in the exploration of Alum Pot were it was used to lower people and tackle down the open surface shaft. 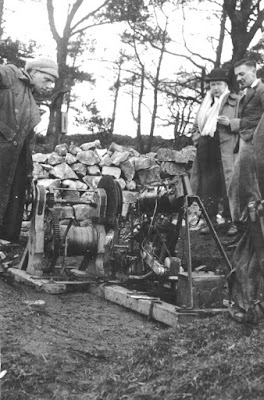 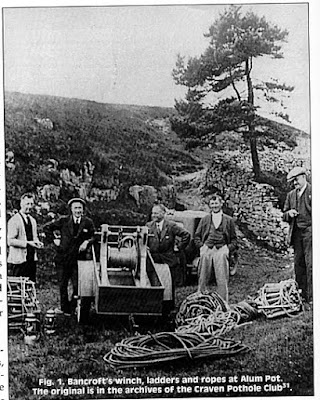 Despite this technical assistance, he failed to reach his goal but as a constellation he received £25 for a two page article in the Illustrated London News, which would have made a significant contribution to his expenses.

Eric had a gentleman’s agreement with another club that if he did not manage to bottom Diccon Pot within three months, he would hand it over to members of the Gritstone Club and in 1931 they solved the water problem by rebuilding a 17 meter aqueduct, and reached the bottom on 31st January 1932, and in the same month Eric donated his winch to the Northern Cavern and Fell Club for use at the Gaping Gill complex.


We now know that the Bancroft’s were also closely associated with the Lancashire based Northern Cavern and Fell Club and that the winch was eventually sold to the NCFC in 1931 to facilitate descents of the 110m deep Gaping Gill Hole on the slopes of Ingleborough.

Both Eric and his father joined the NCFC around this time and Eric continued to cave with them until the outbreak of WW2.

Eric was part of a NCFC contingent that took part in the first serious cave rescue from Gingling Hole on Fountains Fell in October 1934. The safe recovery of a caver with a broken leg took two days and the combined man-power of many Dales cavers from several clubs. Such had been the resources required that this incident resulted in the formation of the Cave Rescue Corps , later renamed the Cave Rescue Organisation and still active today.


As far as Eric’s family history is concerned, he was born in Denholme in 1907 and his full name was  Frederick Thomas Bancroft,[ although he was always known as 'Eric' which was a shortened version of Frederick], the son of Hugh Victor and Emily Jane [nee Tidswell]

Eric's father Victor, worked at Foster's Mill in Denholme, as did most of the village, in a senior position of Chief Cashier, although the above 1911 census wrongly describes him as a 'Bank Accountant'.  He and Eric went on many trips around the British Isles and Europe. He was an active member of the Christmas plays at the Denholme Independent Chapel, and Eric and his father produced lantern slide shows of their various trips both around Europe and their potholing exploits. On one occasion they were showing a lantern slide presentation at the Parish Church in Denholme between the two world wars. Victor's large brass projector was set up at the front of the gallery projecting onto a screen lowered by a rope and pulley in front of the Chancel Arch, and when the rope was released to lower the screen into the position, it struck the head of the vicar, to everyone's amusement!

The 1939 census above also shows that Eric was in the auxiliary fire brigade, and was stationed in Liverpool during WW2, at a time when Liverpool was only second to London as far as number of people killed and damage done. His family remember him saying that when fighting a fire it was not unusual to be showered with hot water from firemen working on the other side of the blaze.
Eric worked in the wool industry in Bradford, at a time when the city was booming as the wool capital of the world, He started as an apprentice wool sorter in 1924 and in 1951 the company he worked for, Parkinsons, promoted him to a job in New Zealand as a wool buyer, so the whole family emigrated.

He and his wife eventually moved back to the UK and retired to Harrogate in 1972 having worked for Parkinson's for 48 years. 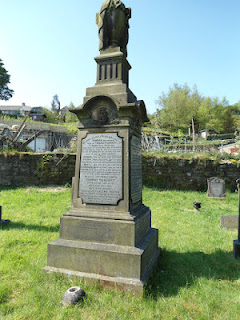 Eric died on 28th August 1981 in Harrogate, and was buried in the family vault at Denholme Independent Chapel.


I am greatful to the 'Craven Pothole Club' who provided much of the information and photographs for this article. Their website is here.
https://www.cravenpotholeclub.org/
Email ThisBlogThis!Share to TwitterShare to FacebookShare to Pinterest

This is my Grandfather and my Dad John Bancroft’s father