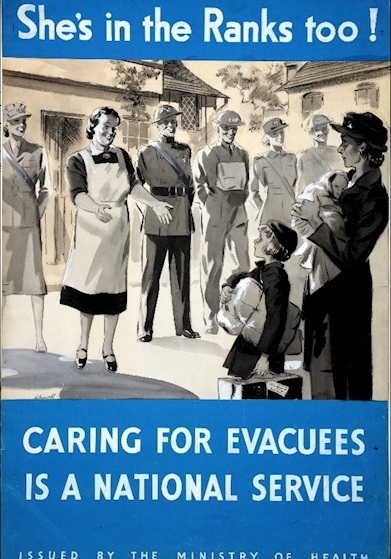 Here’s a heart-warming story about a single lady called Emma Bancroft, who lived all her life in Lees, an area on the outskirts of Haworth in Yorkshire.

Emma was born on 17th July 1880 in Lees, the youngest of six children to Abraham and Eleanor Bancroft, and grew up with a family of mill workers, who all worked in the local mills.

Emma and her three sisters seemed to be all unmarried in the 1911 census, and were all living in the Lees area with their widowed father Abraham, at which time she is shown as a Worsted Weaver.

She seems to have lead a quiet unassuming life until the outbreak of WW2 in 1939, when she was called upon, with many others, to provide homes for children who had to be evacuated from areas of danger, when at that time she was living alone at Gordon Street in Lees.

Whilst most people think about the evacuation of children in 1939 being from the large industrial cities of London, Birmingham etc, one area of the country which was actually invaded by the German Army was the Channel Isles and this is the story here.


On 19 June 1939 the Guernsey local paper published announcements that plans were well in hand to evacuate all the children from the island, telling parents to go to their schools that evening to register, and to prepare to send the children away the next day. Some schools asking that the child and their suitcase be brought so it could be checked.Teachers were told they were expected to travel with their children bringing assistants to help, mothers volunteered.
Some schools decided to relocate in total whereas others had their children scattered amongst local schools all over England, Scotland and Wales. 5,000 schoolchildren evacuated from Guernsey and 1,000 stayed with 12 teachers

Upon arrival in England, the Guernsey school children were met with mountains of jam sandwiches, bread and butter and tea, before being given a medical and then put on crowded and blacked out trains... machines most island children had never seen before, to be transported north.

Lloyd Ozanne was a child of 12 years of age in 1939 when invasion was threatened in his home on Guernsey, and in later life he wrote his autobiography about his evacuation and the time he spent in Yorkshire when billeted with Emma Bancroft. Here are a few extracts from his autobiography:

‘The day came, when having said goodbye to friends, we boarded a coach for pastures new. Arrangements had been made for the evacuees to be absorbed into villages clustered between Keighley which was in West Yorkshire, and Haworth, made famous by the Bronte family of authors. I can recall feelings of sadness at leaving behind the generous people, a little apprehensive about meeting new hosts and integrating with yet another community. The coach wended its way through the Yorkshire countryside, passing through Halifax over the moors to Lees school, which was about a mile on the Keighley road from Haworth. There we were introduced to the waiting hosts, and soon I was shaking hands with Emma Bancroft. She had volunteered to have a quiet little girl, but instead greeted a robust 12 year old boy. I guess she was about 63 years of age, which at the time seemed ancient to a young lad. She lived alone in a back-to-back terraced house on Gordon Street in the village of Lees and Cross Roads. Aunt Emma as I was to address her, had brought her nephew Billy Taylor with her, so that I would feel more comfortable. Billy was the same age as I was, so that was very thoughtful of her. I remember feeling slightly envious of other kids, who were being introduced into households that included younger family members.

Aunt Emma was a shy sensitive lady. Although she had worked as a Mill girl and spoke of walking down to Merrill’s mill in clogs, she read great literature, and was fond of poetry. She was a member of Lees Methodist Church and I would attend worship with her. Most of the Guernsey children attended Sunday school there. I realise now that Aunt Emma was most gracious and unselfish. Never at any time did she become possessive towards me, but would often ask the question “What would your Mum and Dad want you to do?”, when confronted with options in a given situation. Being so quiet and sensitive, she never raised her voice in displeasure or rebuke. However, her look of disappointment or hurt would be enough, I could not cope with tears. She was a loving caring person but not physical in the expression of her love, and as a lonely boy, I missed the cuddles of warm mothering. One recognises Aunt Emma did her job well, always trying to make sure I would return to parents who could be proud of their son.
Education again proved a problem because of the mixed ages of the evacuees. Mr Brehaut believed it was important to keep the group together as far as possible. He gathered the children over 11 years of age to form a class, which was welcomed into the village school. The younger children were integrated with local scholars, into appropriate classes. Obviously, the senior class comprised entirely of Guernsey boys and girls being of mixed ages and it was extremely difficulty to teach and to manage them. Our Yorkshire hosts were appalled at the standard of teaching we were receiving and complained to the authorities....’

Lloyd, goes on to talk in detail about his life as an evacuee with Emma Bancroft, his education at the local school and his first job at a Florist in nearby Keighley.
After the war ended in 1945, and Guernsey returned to normality he returned to his home, and returned again to Yorkshire in 1961, joining Primrose Hill Baptist Church in Huddersfield as the pastor. He went to Sittingbourne, Kent in 1968, and then became a full time Hospital Chaplain in Sheffield in 1976. He finally returned home to Guernsey in 1992 and has lived there ever since as a retired Baptist Minister.

As for Emma Bancroft, she seems to have continued to live her quiet unassuming life and died in 1963 in the Worth Valley area at the age of 82 years.

[I am grateful to Lloyd Ozanne for allowing me to use part of his autobiography in this article]
Email ThisBlogThis!Share to TwitterShare to FacebookShare to Pinterest