I recently attended an annual service at the Bradford Cathedral, and while I was soaking up the atmosphere of this magnificent 15th century building, my thoughts went back to the time when my Grandparents were married there.
My Grandparents, John Bancroft and Hettie Watson, were married on 23rd September 1911 in the Cathedral, and as some stories are not always passed down through the generations here is the story of the lead-up to their special day as told to me by Hettie many years ago.

The ingredients for this marriage, were not made in heaven, but it was probably a marriage of convenience which suited them both…no doubt the plan was hatched during their courtship over a wall where their farms met. Having said that they were happily married for over fifty years and raised three children.
John and Hettie grew up on adjoining farms, John at Nettle Hole Farm and Hettie at Black Carr Farm, and they must have therefore bumped into each other all the time as they worked on their respective farms. John and his brother Greenwood, had been living a solitary life on the farm and since their parents had died in 1900 and 1905, and after their sister, Sarah Hannah had married and moved on, it was probably necessary for John to have a woman about the place, as the two bachelor brothers would have been struggling to keep everything in the house running satisfactory. 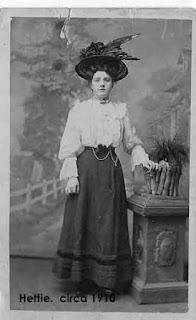 Meanwhile, Hettie was still living with her parents and younger two sisters on their farm, and as well as having to work on the farm she was also working as a weaver in a mill in the nearby village of Thornton…. a job she hated.
When Hettie announced to her parents in her broad Yorkshire dialect “ am bahn wed John from’t Nettle Oil” [I am going to marry John from the Nettle Hole], all her parents, who did not approve of the marriage, had to say on the matter was “ Tha’s med thi’ bed, nah thi’ can lig on it!” [you have made your bed, now you can lay on it!]. However Hettie, having reached the age of 21 years, did not need their approval, so the wedding went ahead.

My Grandmother was a very formidable lady, and obviously was out to make an impression with all their friends and relations, so the wedding took place in no ordinary church, but in the Bradford Cathedral, also known as St Peter's in those days. As can be seen from the following photograph, no expense was spared on her wedding dress and hat, or indeed my Grandfather’s outfit. 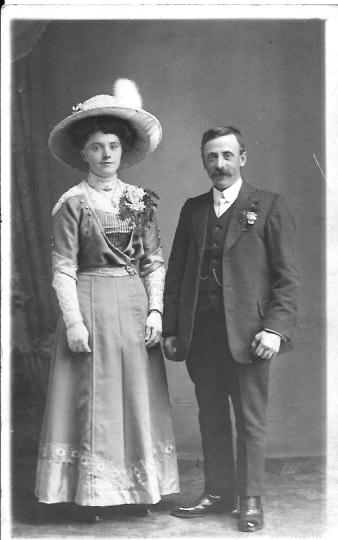 A honeymoon in some seaside town for the newlyweds was out of the question because all the livestock on the farm had to be fed and the cows milked that evening, so not wanting to just go straight  home to Nettle Hole, Hettie thought of a grand gesture to impress everyone by organising a carriage ride around nearby Manningham Park, no doubt with plenty of people present to admire the newly married couple in all their finery. 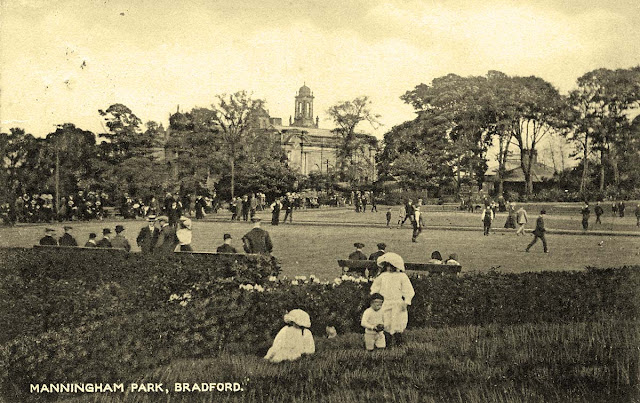 The family farm had always been known as " Nettle Hole" up until the time my Grandparent's married, but thereafter it seems to have had it's name changed to "Nettle Hall".....maybe Hettie thought it was time to give it a more glamorous name, befitting her new position as a farmer's wife!

To finish, here is what I think is a lovely picture taken at Blackpool in the 1950’s, a place they really loved, which I think shows the affection that the couple had for each other.