The last " Official" Past Chairmen's Lunch

The event had been held for many years in ‘The Bradford Club’, a fine example of mid-Victorian architecture in the heart of Bradford, steeped in history from the city’s affluent past as the centre of the wool trade throughout the world. The club was established in 1857 and was originally a gentlemen’s club where all the mill owners and wool merchants used to meet for lunch, and continue their trading over lunch and a game of cards or dominoes.

As the office junior in my first job in Bradford during the 1960's, one of my duties was to chauffeur our Managing Director of the company to the club for lunch with his pals, and then pick him up, usually the worse for wear, and drive him home. I had always wondered what the club was like inside....I've now had a chance to see for myself! I have to say it was exactly as I expected.... a traditional gentleman's club...a place that time had forgotten...apart from the fact that it now also allows women in! 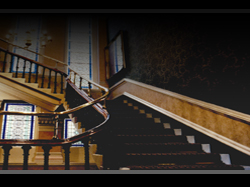 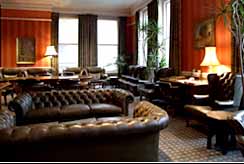 Wednesday 12th December 2012 was the first occasion of the Bradford and Keighley Past Chairmen’s annual lunch, to which I was invited. This had been an annual event over many years for the previous Bradford Bench, but with the merger of the Bradford and Keighley Benches in January 2012, it was felt appropriate to continue the event with the new enlarged bench, and what an enjoyable event it was!
Our oldest member being Arthur Bailey who had reached the grand old age of 101 years, and was still in fine fettle both physically and mentally on the day, so much so that he gave a short talk about the memories he had as Bench Chairman between 1971-1977. One interesting anecdote he mentioned was with regard to one of the annual Keighley Bench meeting he chaired in the early 1970, when a member of the bench stood up and warned him about the dangers of merging the Keighley Bench with Bradford’s by saying “Now think on Arthur…don’t be doing any deals, and agreeing to go in with that lot at Bradford”!! This brought the house down with roars of laughter, as we all now realised that a merger had been on the cards for the last 40 years!

Arthur Bailey is third from left on the front row of this 2012 photo, and being the nearest person living near him, I agreed to pick him up and take him home and when I asked him what the secret was to reaching 100 years of age, he smiled, leaned over and said it's down to one thing... luck....nothing else! and he went on to explain that both his parents died in there 70's, so it was nothing to do with genes.When I dropped him back home, my parting comment was " well we'll see you next year then Arthur at the next Christmas Lunch". He waved from his door and said " hopefully with a bit of luck, although I have seen a marked reduction of 50% in myself over the last 12 months". As I left him and drove away, I could not help but think...if his is like this at 101, what must he have  been like a year ago at 100 years old, when he was 50% better!! [Unfortunately Arthur never did made the next gathering, as he had to go into a nursing home, and is still there today.]

Another past Bradford Chairman reminisce at one of our lunches about the time he was showing an official from the Courts Services Committee around the underground car park at the Bradford Courthouse, as they had plans to possibly use it for other purposes, and make the magistrates park elsewhere. This proposal never got off the ground after he mentioned that the car park had been earmarked as a potential bunker for the great and good of the town, in the event of a nuclear attack!….The story-teller admitted that this had  been "massaging the truth a little", but it seemed to have worked at the time, however since then part of the car park has been converted into prison cells, to accommodate prisoners waiting to go into court, after having been transported from the local prisons

The Bradford & Keighley Bench will no longer be in existence after March 2017, due to all Benches in West Yorkshire merging, but we are hoping to continue with an "unofficial" Lunch annually in the Bradford Club. 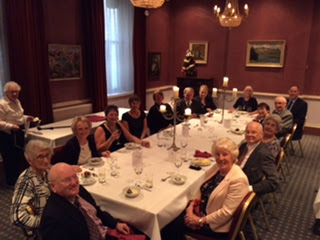