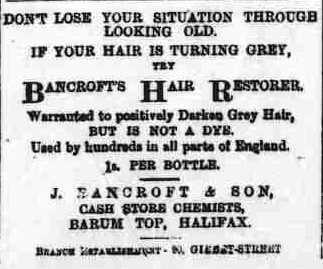 I wrote an article some time ago about the family of James Bancroft [1788-1862] from Halifax in West Yorkshire, who together with his son Anthony [1826-1876], and eventually his Grandson James [junior]  [1858-1923] ran a small business as a Chemist, sometimes known as Druggists, in the town. The original article can be read here.


By the 1880’s the business looked to be still thriving under the management of James [junior], so much so that they were regularly advertising various potions and remedies in the local newspaper. Today these remedies might look amusing, but at the time were much sort after by the general public who could not afford to pay for a visit to the doctor, or too embarrassed to talk about their condition.

Here is a selection of the adverts. [Apologies for the poor quality of some of them]


The first advert at the top of the page is one such case….a potion to get rid of grey hair, offering a solution so that people didn’t ‘loose their position through looking old’…wonder what they meant by that?...maybe to do with future employment or even with romance in mind! The advert says it is not a dye, and is used by hundreds of people….and all this for just one shilling a bottle! 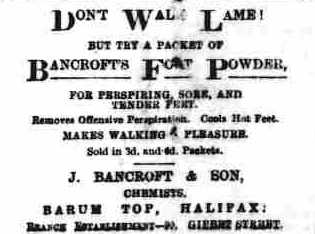 ‘Don’t walk lame’ was the heading for this next potion, a foot powder that had marvellous claims for anyone suffering from offensive perspiring, sore or tender feet. 'Makes walking a pleasure', and all this for only three pence or six pence a packet!


And here is another one for a cure for influenza, which purported to “remove pain from the back and limbs, headaches and distressing coughs…and prevent the illness developing into PNEUMONIA” and claiming that hundreds of cases had been cured during the last five years... all for the small cost of just over one shilling a bottle 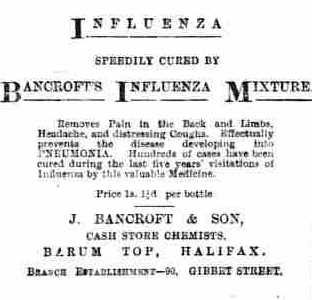 And for those sufferers of backache, here was James Bancroft's marvellous remedy called 'Lumbago and Gravel Mixture', which was advertised as a cure for backache, gravel and all kidney complaints. The business urged anyone to "ask a neighbour who has suffered, what they think of it"...what better recommendation could anyone ask for! 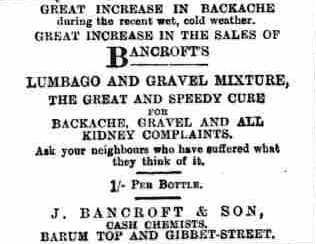 And finally, if you were suffering from 'cruel, gnawing pain after eating' you could get relief in 10 minutes by taking 'Bancroft's Bismuth Bitters...The Geat Modern Cure', which had 'never been known to fail' 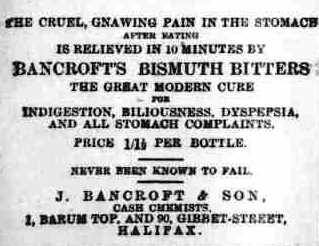 James continued to run the family business through the 1880’s and early 1890’s, listing himself as a ‘ Pharmaceutical Chemist Manufacturer’ on local records,


I'm not sure how effective these remedies were, but I suspect James became a relatively wealthy man, as the 1891 census shows him as retired at a relatively young age of only 33 years, and living with his widowed mother and sisters, when most of the working classes of the time worked until they dropped.


He later moved to Redditch in Warwickshire, and in 1904 married Martha Johnson at Alcester.
He died at his home, called ‘Rooklands’ on 21st March 1921 and his will and estate were handled by a local solicitor back in Halifax.