“Greater love hath no man than this, that he lay down his life for another.”

To coincide with the WW1 Centenary and this year's Remembrance Day, here is the sad story of Seth Bancroft who died  in September 1915 at the age of only 21 years, and less than a month after going over to fight in France. 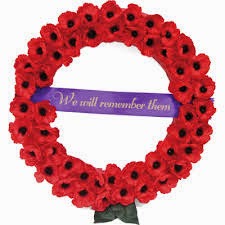 Seth was born in 1894 in the village of Oxenhope, near Keighley in Yorkshire, the son of Jonas and Sarah [nee Sunderland] Bancroft, and was one of a family of nine children, of which four died of infants. His father Jonas, came from a family of quarry owners who ran  Deep House Quarry at nearby Oxenhope, and Jonas himself eventually became a quarry manager after initially working as a carter at his father's business in Oxenhope.
The 1911 census shows the family living at 23 Prince Street, Haworth, where Seth at the age of 17 years was working as ' Jobber Lad - Bobbin Carrier' at a Worsted Manufacturers.

No further details of his early life or photographs seem to be available of Seth, but looking at the following Army Index Card, it seems as though he was transported to France on 26th August 1915 in the Duke of Wellington's Regiment, and was serving as a Private in the 10th Battalion in September 1915. He died less than a month later. From details on the index card it appears that he qualified for the 15 Star and also for the British War Medal as well as the Victory Medal.

[The decision of who should get which medals was made separately. Everyone who entered a war theatre got the British War Medal, and everyone in service during the war also got the Victoria Medal. The men who were there before 1st January 1916 got a Star of some kind, the 1914 Star was awarded for service between Aug 5th and Nov 22nd 1914 and the 1914/15 Star from November 23rd 1914 until 31st December 1915. Those who were within range of German artillery in the first period Aug 5th to Nov 22nd 1914 also got the Clasp to the 1914 Star and were known as the 'Old Contemptibles']

The Duke of Wellington's 10th Battalion was formed in Sept 1914 at Halifax and moved to Frensham, to join the 69th Brigade of the 23rd Division, before  moving on to Aldershot.
In February 1915 it moved to Folkestone and then to Bramshott, and by August 1915 it mobilised for war, and landed at Havre and engaged in various actions on the Western Front including;
Trench familiarisation as part of the 20th (Light) and 27th Divisions and then took control of the front line at Ferme Grande Flamengrie to the Armentieres-Wez Macquart road and by September 1915 it was at the Bois Grenier line.

On the morning of 25th September 1915, young Seth Bancroft was stationed on sentry duty in one of the trenches when a German shell failed to reach its destination, and landed in his trench. Seth was hit in the head, and was taken to the local hospital, but died at 5.00 o'clock that afternoon.

Shown below is the Duke of Wellington's 10th Battalion War Diary for 25th September 1915, which describes that day and lists only one unnamed soldier killed that day, which I an pretty certain was Seth Bancroft.

Back home in England his widowed father Jonas, received word of his son's death by telegram from the Lieutenant in Command of the Regiment, and a few days later he also received a hand written letter from a Private George Peacock, who was also on sentry duty with Seth at the time of the incident, and who had been left unharmed by the shell damage, so was able to explain to Seth's family exactly what happened.

The following two pictures show the graveyard towards the end of WW1 in 1918,with the Church in the background having suffered heavy war damage, and also a modern site plan of the war graves. The earliest Commonwealth burials were made in two places in the churchyard itself, in October 1914-January 1915, but these 27 graves were moved into the extension (Plot II, Row G, and Plot III, Row G) in 1925, the churchyard being closed for burials. The extension was begun in April 1915 and used by units and field ambulances until April 1918. It was continued down to the stream by the Germans (who also used the churchyard) in the summer of 1918, and in September and October 1918, it was used again for some Commonwealth burials.The extension now contains 558 Commonwealth burials of the First World War (eight of them unidentified) and 130 German burials. One unidentified Russian servicemen is also buried in the extension.

“ Greater love hath no man than this, that he lay down his life for another”