I came across this interesting story in the Keighley News archives, about a Jabez Bancroft [1854-1933] and the interesting jobs he had as a Metal Broker and Demolition Expert.

Jabez was born around 1854 in an area called Bocking which is on the outskirts of Keighley, within the Bingley Parish area.

His parents were Joseph and Deborah [nee Mitchell] and they were part of the large family of Shuttlemakers and Woodturners, who I wrote about previously and which can be read by clicking here.

At the tender age of 7 years, Jabez started work in the factory of George Hattersley & Sons, at their Northbook Works in Keighley. The company was well known around the world as Loom Manufacturers. 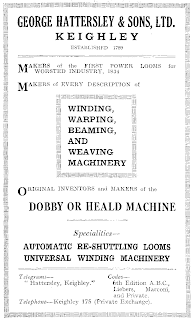 Jabez did not seem to stay working at Hattersley's, because by the time of the 1871 census his job was listed as a Joiner, and  he then went back working with the rest of his immediate family as a Woodturner, and continued with this after his marriage to Elizabeth Ann Ramsbottom in 1875. They had 5 children, 4 sons and 1 daughter, and by 1901 Jabez’s occupation  had changed again because the census of that year shows him as now being a “Machine Broker” and later as a “Metal Broker”. He is listed as being in business on his ‘own account’ which would have meant he was self employed. It seems clear, from details written at the time that he was involved in big demolition jobs from this time onwards. Evidence of this business is shown by an incident in 1905, where he was called as a witness in a bankruptcy case of an iron broker called Seth Ormondroyd, regarding a dispute over the ownership of a boiler, an engine and other plant equipment which were being sold off as part of the sale and demolition of and old mill in Thornton. Jabez was one of the persons negotiating to handle them as part of the demolition job, but in the event did not do the work.

He often used explosives in connection with his demolition work, and when interviewed by the press about this, he related an incident when on one occasion he was trapped in a crank-pit of a big steam engine, after setting a time fuse to go off. The ladder with which he intended to get out of the pit had broken and the sides of the pit were covered in slime and grease making it impossible for him to climb to safety. When asked how he managed to survive, he said:… ‘I just stood there with his hands behind my head, hoping for the best and fortunately when the charge went off, none of the broken pieces fell my way’!

Another  press article says he was a person who could cope with electric shocks….’ He was able to allow the high voltage to pass through his body apparently without inconvenience, and was able to grasp electric cables charged with a current which would have seriously injured most men….he could put his hands on the plugs of a motor vehicle engine and stop it!’

In early 1931, a large four-storey, 111 feet long corn mill called Mantra Mill and owned by  W & J Bairstows, at South Street in Keighley was destroyed, in what was said to be one of the most destructive fires ever seen in the town. Due to the nature of the business undertaken at the mill there was a great deal of combustible material held there, so the fire completely destroyed the mill building. Jabez then took on perhaps his most spectacular feat of demolition by pulling down the huge water tank and tower which was left standing at the back of the burned out mill. The water tank on top of the tower weighed over ten tons, and with the aid of only one assistant Jabez pulled the tank down to the ground with only a wire rope and a winch. He then had the job of blowing up the stonework of the 80 foot tower with dynamite....one can only imagine the health and safety nightmare this would cause today! [ The photograph  at the top of the page, taken from the Keighley News, shows the water tank on top of the 80 foot tower falling, and the one above shows the Mill and Water Tower before the fire, and gives a good indication of the size of the mill, before the fire, and water tower]

Jabez died two years later on the 8th October 1933, a few days before his 80th birthday at his home at 5 Cliffe St, Keighley, and was buried at the local cemetery at Utley, on the outskirts of the town. 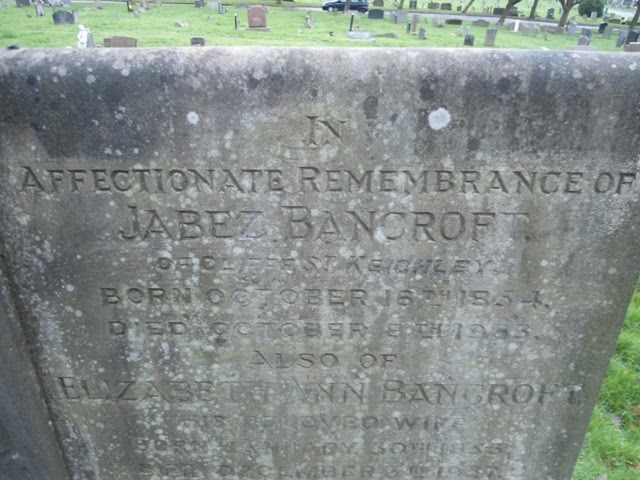 His obituary in the Keighley News said:
‘Keighley has lost a well known character by his death….he had been in business on his own account for over half a century….his principal occupation being that of  “The Wrecker”.

The poor quality picture below, taken from the Keighley News, shows the 80 foot stone water tower actually being blown up by Jabez, one quiet Sunday morning in 1931. 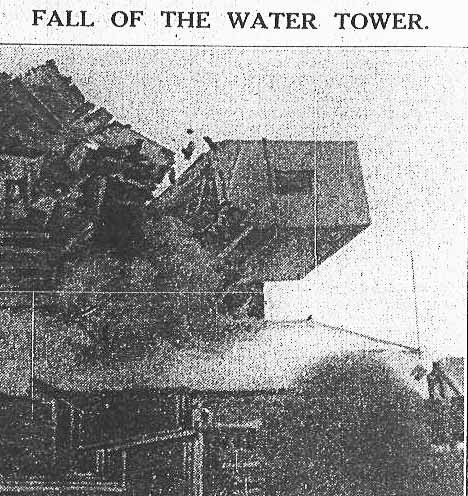