Most of the Bancroft individuals who originate from the West Riding of Yorkshire, and who were involved in the textile industry, were workers in wool, either as weavers, combers or spinners.….but here’s the story of one individual who moved a few miles over the border to Burnley, Lancashire and eventually became a Mill Owner and Cotton Manufacturer of quite a large enterprise…..North Bridge Mill in Burnley.

COTTON weaving and spinning was Burnley's staple industry for almost 200 years.
Without cotton, Burnley as we know it, may never have existed, and in it's heyday it became the cotton manufacturing  capital of the world. Over 140 mills once operated in the town, and at the peak of the cotton industry in 1929, 63 per cent of the town's working population worked in some capacity at one of the mills in the town.

Husbands, wives, sons and daughters often worked together at the looms, although children under nine were forbidden to work under an Act of 1833. The mill owners got round that by hiding the under-aged in sacks, should word get around that an inspector was on tour in the area!

By 1875 the hours of work for the mill and factory workers were reduced to 56 a week, and at the turn of the 19th century, the mill engine was stopped on Saturday lunchtime. The 45-hour week was introduced in 1945.

And so here is the Bancroft  connection to this story.....William Bancroft was born on 19th April 1823 in the Keighley Parish area, known as Ponden, near the village of Stanbury and was baptised on 22nd July of that year at Haworth Parish Church, which was geographically nearer to where the family lived than the Keighley Parish Church. His parents were Abraham and Hannah [ne: Mitchell] Bancroft and he was one of seven children.

Life must have been hard for the young William, as his mother Hannah died in 1834, aged only thirty-one years old, when he was only eleven years old.

The 1841 census shows his father Abraham, as a stuff weaver, widowed and having to look after his children and living at Back Lane Stanbury near Haworth. [Stuff weaving was a common Cottage Industry in these times which produced a course cloth made from long or combed wool, and unlike higher quality cloth, had no pile or nap. It was common practice for cloth merchants in the area to provide the raw material of combed wool to many families in their home, so that they could then produce this course cloth on their hand-looms. The merchants would then call back later and collect the finished cloth to sell at the nearest cloth market in either Bradford or Halifax]

The young William  was shown as working in a worsted factory at the time of the 1841 census. Within a year his father Abraham had also died , aged about 42 years,leaving the remaining family of now only four children to fend for themselves....three of the siblings having  died at an early age.

By the time of the 1851 census, the remaining family of four siblings had all split up. Two of his sisters, Nancy and Mary Ann were living with an Uncle, their mother's brother James Mitchell, who took them under his wing. He was obviously a man of means because he owned the Oakworth Mill employing over 1000 people. William's younger brother James, turns up as a scholar at a private school in Scarborough....possibly paid for by Uncle James Mitchell? William himself had made the move over the border, about 10 miles away, and made major strides in his employment. He is now listed as a single man in lodgings at Fenkin Street, Burnley, and at the age of 27 years is described as a ‘Manager in a Cotton Mill’

William went on to married Mary Clarkson from Todmorden, near Halifax at St. Peters Church, Burnley early in 1857.  Their first child, a son Thomas, was born the following year but sadly he died in 1861, when he was three years old. The census of that year shows the married couple living on their own at 14 Ashworth Street, Burnley with William’s occupation still being shown as a ‘Manager in a Cotton Mill’.

Their second child, a daughter, Lucilla, was born in 1863 but sadly she also died in infancy the following year aged only 14 months and was buried in April 1864. Then just to add further tragedy to this story, William's wife Mary also died, less than a month after her baby daughter, at the young age of 29 years and was buried in the same grave on 1st May 1864.

William was therefore left a childless widower at the age of 39.  By 1871 he had become a cotton manufacturer in a small way at North Bridge Mill, where he employed 67 people.  He was then living in Hallwell Street with 27 year old Elizabeth Speak from Barrowford as his housekeeper.  She was still with him when he moved to the more upmarket and fashionable area of Palatine Square in the 1870s and they married in 1882. Eventually they moved again, this time to 175 Colne Road, where William at last settled.  He was still living there with Elizabeth when he died on 6th January 1905 at the age of 81 and was buried at Burnley Cemetery.

His obituary in the local newspaper was as follows:
'We regret to announce the death of Mr William Bancroft, which took place early yesterday morning at his residence of 175 Colne Road. No one will be surprised at this, when they consider that he arrived at the ripe old age of 81 years. He was a man who had been well known and highly respected for more than half a century. Formally, and until reaching old age, he was a cotton manufacturer. He was a trusted executor of the late William Halstead, and had handled the administration of his estate, which involved a great deal of characteristic enterprise. No one who knew Mr Bancroft, would have the slightest misgivings as to his ability and honour. Faithfulness characterised his conduct. He had been associated with the Colne Road Wesleyan Chapel, and was a trustee for probably at least 25 years.He was always kindly, and received kindness from all quarters. With his death, there is removed from Burnley one of it's oldest citizens. He is survived by his wife.'

The mill, which is still situated in Elm St. Burnley, was originally owned by John Hurtley and Son - cotton spinners and manufacturers, who were operating from this mill from around 1868 to 1879. From this date it's name changed to William Bancroft and Co. Ltd., cotton manufacturers, and continued to operating at the mill under that name till about 1923, even though William had long since ceased to have any involvment with the business.At it's hight the mill was shown to be operating 228 looms. From about 1912, the mill building was shown as  'New Hall Mill' on all the maps of the area in addition to a second New Hall Mill further up Elm Street. In the mid 1940s, John Walton and Son Ltd., cotton manufacturers were operating at the mill.


The mill is now part of the North Bridge complex, a group of small commercial units.  North Bridge Mill consisted of a three storied sandstone spinning mill, with a smaller four storied apex section.  Modern additions are to the rear, with a small weaving shed and warehousing on the Daneshouse Road side. 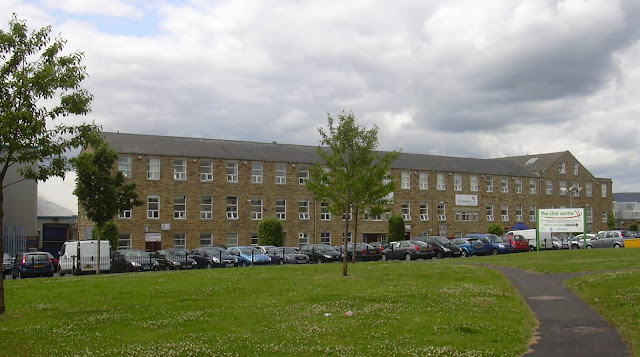