Joseph Parents, Joseph and Mary Ann were both born in Yorkshire, Joseph from Stanbury near Haworth, and Mary Ann from Grassington near Skipton, and it looks as though Joseph [snr] moved over to Arwick near Mancheser, with a job, some time in the 1870’s because census records show him living with adopted parents in Sutton Yorkshire in 1871. It is pretty clear from the records that he was illegitimate, so there is no record of a father but it seems quite possible that his mother was Ann Bancroft b 1821, the daughter of Joseph and Isabella [nee: Jowett], because she was listed as a single girl and working in the area at that time, which was well away from the rest of her family who were living in an area called Cragg Bottom, near Stanbury, which although nearer the Haworth Parish area was geographically in the Keighley Parish.
By 1881 Joseph[snr] was working for a Corn Dealer and living at Ardwick, and when he died in his early 50’s, the family then all moved back to Sutton in Yorkshire , where Joseph [jnr] got a job as a shop assistant in the local Co-Op shop.

When war was announced in the autumn of 1914, the young men of the nation came from towns and villages to take the King's shilling and to offer their dedicated services in defence of their homeland. Young men flooded into the recruiting centres in answer to their nation's call for young manhood.

Prior to enlistment, Joseph Bancroft was employed as assistant manager in the grocery department at the Sutton Mill Co-operative Society. 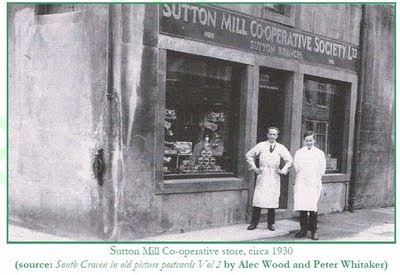 At the outbreak of the Great War, Joseph Bancroft responded to the call and volunteered to enlist into the 1/6th battalion Duke of Wellington’s (West Riding Regiment) in September 1914. His regimental number was 2713 and he commenced with the rank of Private, and  entered the war on 14th April 1915 when the 1/6th battalion West Riding Regiment landed at Boulogne in France.

The West Riding Regiment raised 24 battalions during WW1 including the 1/6th (Territorial Force) battalion at Skipton on 4th August 1914.

The Western Front was the name applied to the fighting zone in France &amp; Flanders, where the British, French, Belgian and later American armies faced that of Germany.
It was marked by a system of trenches and fortifications separated by an area known as "No Man's land". These fortifications stretched 475 miles and precipitated a style of fighting known as trench warfare. From the moment the German Army moved into Luxembourg on 2nd August 1914 to the Armistice on 11th November 1918, the fighting on the Western Front in France &amp; Flanders never stopped. Just as there were quiet periods, there were also the most intense, savage, huge-scale battles the world has ever known.

Having been in France for only 4 weeks, Joseph wrote the following letter to a friend back home about his experiences in the trenches so far, which was published in a local newspaper on  21 May 1915.

SUTTON MAN TALKS WITH THE GERMANS
In a letter to a friend, Private Joe Bancroft, who before the outbreak of war was employed in the grocery department at the Sutton Mill Cooperative Society, writes:- "I have only seen one German yet. I had a pot at him but he 'bobbed'. The Germans use the periscope a good deal,and we do the same.
The troops opposite I fancy are Saxons. They are so quiet. The last lot were the Prussian Guards, a very noisy lot. One day some of our fellows shouted across to their trenches, "To ------ with the Kaiser". The answer came back, "Yes, we say the same. I wish I was back in London." In referring to the Christmas incident, Private Bancroft says it was no fable. "One of our soldiers I was speaking with said it would have happened at Good Friday, but their officer said 'No, you would be having tea with them.' Last week we were shelled in our billets and they did some damage. Our aeroplanes seem to do far more work than those of the Germans, also our artillery. The aviators are very plucky. The buildings around here are more or less shelled, and look very dilapidated. It is a shame to see nice farms ruined. If the people over yonder saw them they would waken up and do their part to get this job finished. You cannot understand what war is like until you are in it. I am about three miles from Belgium and if my chance comes, I will do my bit for poor Belgium. The tales about the German treatment are all too true."

6 months after arriving in France, Pte Joseph Greenwood Bancroft was killed in action on the Western Front on the 22nd October 1915 He was 26 years of age.

The local newspaper reported his death on 29 October 1915 as follows:
"DEATH OF PTE. J. BANCROFT OF SUTTON"
2On Tuesday morning, Mrs. Bancroft, of Holme Bridge, Sutton, received news that her son, Pte. Joseph Bancroft, had been killed in the trenches on Saturday morning last. Pte. Bancroft was very widely known in the district, and his death is deeply deplored. Prior to joining the 1st Duke of Wellington's, he was employed in the Sutton Mill Co-operative grocery stores, where his services were greatly valued by the committee. His courtesy and desire to please were acknowledged and appreciated by its members. Although not a member of the Sutton Baptist Church, he was a regular worshipper, and took a great interest in the Young Men's Bible Class, being treasurer at the time of joining the army. He is the first connected with the Baptist Sunday School and Church to lay down his life. His comrades at the front are greatly distressed at his death. The following has been received by his mother, with whom great sympathy is felt:- "Dear Madam, - I am sorry to inform you that your
son, Private J. Bancroft, was killed in the trenches yesterday (Saturday). He was a good soldier and always did his work well, and a great favourite with both officers and men. You will be glad to know
he suffered no pain. Please accept the deepest sympathy of officers and men of the A Company, 1st Duke of Wellington's Regiment. -Capt. Nicholson."

Article Date: 05 November 1915
SUTTON - THE LATE PRIVATE JOE BANCROFT
Memorial Service at the Baptist Church
On Sunday morning last, a service to the memory of the late Pte. Joe Bancroft, of the 1st 6th Duke of Wellington's Regiment, who was killed in the trenches on Saturday, October 23rd, was held in the Baptist Church, the pastor (Rev. F.W. Pollard) being the preacher. The large congregation was representative of all denominations in the district, there being present the committee of the Sutton Mill Cooperative Society, his fellow workers (shop assistants), members of the Bible Class, for who Pte. Bancroft acted as treasurer, and the 2nd Sutton Troop of Boy Scouts. The service opened with the hymn 'Nearer my God to Thee', followed by the anthem 'There is a land', under the leadership of Mr. Joseph Overend. The story to the children of heroic deeds done by the Red Cross Society was very appropriate to the occasion. Mr. Pollard based his remarks upon the text from John xv., 13, 'Greater love hath no man than he lay down his life for his friends'.
His said: "We are met here this morning to pay tribute and grateful respect to the memory of our dear friend who has been killed upon the battlefield, and your presence in such numbers shows how deeply we all feel his loss. None of us realised it, that he would be taken. It seemed the last thing in our thoughts that his brief, bright life should come so soon to a tragic end. He is the first of our brave lads to fall, and when we heard the news our hearts were wrung with anguish: all of us loved him. He was so bright and cheerful in his disposition and a favourite of all who knew him, young and old alike. He bears a name that we shall remember with thankfulness as long as life lasts. The name of one who was faithful and true, to the highest and best that was in him, and in the spirit of our text, cheerfully giving himself for those he loved and for those who called him friend. In one of the earlier letters received by Mr. Pollard he wrote: "Before I enlisted I counted the cost, I studied about it no little, and now, after six months of hard training, if it was to do now I should just do the same; in fact I don't see how I could do any other way. In your letter you referred to Mr. Wilson's lads (Lothersdale) being fairly in at it. It has to be hoped they will come through. If we don't come back, it's a good cause we are fighting for, and that's worth something." In another letter, said Mr. Pollard, he showed the true Christian spirit. In answer to Mr. Pollard's letter he wrote: "As regards billet life, it is best to be in at it to know. We have all sorts here, all good-hearted chaps, and so long as you keep straight I think you help others who have need of it. Some might laugh at you occasionally, but then . . . . .It does not bother me." "Here," said Mr. Pollard, "you have a spirit of courage manifested in camp life." In another letter which Mr. Pollard referred to as showing the self-sacrifice of the man, he wrote: "A few months ago I never thought I should be in the army, but things have moved fast since then . . . . As regards credit being given to us it is not us, but I think it is the mothers that should have it." "These extracts," continued Mr. Pollard, "speak more powerfully than any words a man could; you all knew him and these words represent the man. He met his death while playing the handyman, preparing a meal for his comrades, and he died while on an errand of loving service. Our friend was steadfast to the duties to which he had given his life, and today we lift up our hearts in gratitude to God for the life lived, and we pray that his removal may be sanctified. He entered this conflict because he heard the call of duty. We pray this example may lead us all to the same fidelity and to manifest the same spirit, which was the very spirit of Christ Himself who loved us and gave himself for us." Mr. Pollard closed his address with a special appeal to his congregation to live for the highest and the best. The service closed with the beautiful hymn 'Brief life is here our portion', and the playing of the 'Dead March'.

Talana Farm was one of a group of farm houses named by the army from episodes of the South African Boer war. The cemetery was begun by French troops in April 1915, taken over by the 1st Rifle Brigade and 1st Somerset Light Infantry in June 1915, and was used by fighting units until March 1918. The Talana Farm Memorial in Belgium bears the names of 529 Commonwealth servicemen of the Great War buried or commemorated in the cemetery, including the grave of  Joseph Greenwood Bancroft. 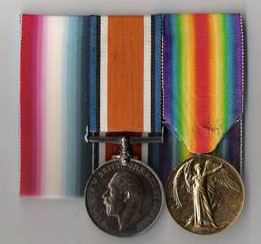 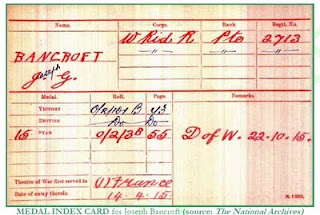 The family grave is still there at Sutton Baptist Chapel, where Joseph’s parents were married, and are buried, and where he was also a regular worshipper. The gravestone has an inscription  about their son Joseph’s death . 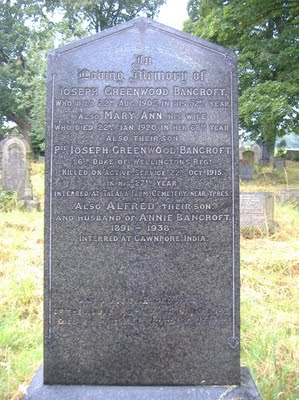 I an grateful to the following websites for some of the information in this article.
Andrew Monkhouse and the Sutton-in Craven Village website on:
http://www.sutton-in-craven.org.uk/
Also the Craven's Part in theGreat War website on:
www.cpgw.org.uk