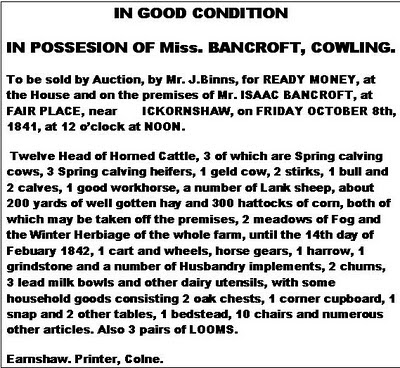 The above picture is  copied from a poster found recently, and reminded me of the details that I found some time ago about this Isaac Bancroft of Fairplace Farm.


Isaac was born in 1777 in the Keighley area, and married Mary Judson on 11th September 1801 at Keighley Parish Church. In the 1803 Craven Muster Rolls he is listed as a weaver, and initially he rented a farm in the Sutton area, a small village near Keighley, before moving  to Fairplace Farm in nearby Cowling in about 1820 and rented that farm, as a tenant,  for £60 per year.
It is interesting to look at the items for sale on the poster. Most of them are farm stock or  farm equipment, but also included are 3 pairs of Looms which indicate that as well as farming, Isaac's family still relied on some additional income from weaving, which was still common practice in many areas at this time when the farm was small and not able to produce enough income on it's own to sustain a large family. 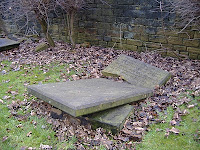 His wife, Mary, died in 1839, and it may have been this that prompted him to sell up everything on the farm, lock, stock and barrel. I do not know where he moved to after the auction, but it is know that he died in the Cowling area on 28th January 1850, and was buried at Keighley Parish Church where his wife had previously been buried. These pictures show the neglected state of the grave as it is today, which is an all too common sight these days in many of our neglected graveyards.

The name "Fairplace" might seem a somewhat strange name for a farm set on these bleak moors, but it is thought that the name came from the fact that there was an annual fair held nearby many years ago.
The name of Piper Lane, on which Fairplace Farm is situated, is thought to be named after the Piper who lead the Fair.
The following details about the fair come from the book “Cowling a Moorland Parish 1980"

"As to what form the fair took is lost in the mists of time. By the mid 1800’s the “Hitchingstone Fair” was jointly held at Sutton and Cowling. The naming of Fairplace Farm is evidence of this. There would be all the usual sideshows, stalls and animal and produce sales associated with this period. One feature was the fell race run between the Hitchingstone, the Pinnacle and Fairplace Farm.

﻿
﻿ Competition was fierce between Sutton and Cowling for the prizes of treacle puddings made by  a man known as "Treacle Billy" who lived in a cottage nearby (the lane is still known as Treacle Lane). This fair was discontinued when a soldier who had cholera attended and an epidemic followed with a large number of deaths. After a few years lapse the fair was revived as the annual midsummer holiday with the mills by closing Saturday and Monday, the traditional date being the Sunday nearest the 9th July. This developed into Cowling Feast, and was the highlight of the social calendar in the village.
On the Sunday morning visitors would begin to arrive in waggonnettes, and this continued throughout the day. Every household had its visitors, twenty or more to one house was quite commonplace. The previous week would have seen much activity, cleaning the house from top to bottom, inside and out, weeding and swilling the pavements and “fettling” the family graves! “Cowinheaders” [the local name for residents of Cowling] were notorious for their hospitality and put on an excellent dinner and tea for anyone who cared to call. Many said that it was a financial struggle because extra collections were expected at the chapels too, but for all the problems the friendships and fellowships were worth a lot. At night when both chapels (Bar and Ickornshaw) had finished evening service, the village street would be packed with visitors and locals, chatting with friends, some of whom they had not seen since the last feast.

Monday was Gala Day with a colourful procession led by Cowling Prize Band. Sunday Schools, Band of Hope and Temperance Society, each with a large banner, and these were joined by gaily decorated carts and tableaux, with children and adults in fancy dress. On arriving at the fair ground children were given the traditional school bun and mug of coffee to sustain them through the forthcoming events. This day had been eagerly anticipated and was enjoyed to the fullest extent with sports for children and adults and the fell race up the Crag to the Pinnacle, plus all the fun of the dobby horses, swing boats and coconut shies. Brandy snap, toffee apples, and huge crystallized fruit jellies were the children’s special delight, to a background of the Brass Band, fair organs and fireworks. The day ended with a bonfire on Earls Crag blazing splendidly. Sadly, Cowling Feast has bowed to the pressure of longer summer vacations, the chapel anniversaries are held on different dates and the Gala is now at the end of July."
﻿﻿

﻿﻿ ﻿
I wrote an article some time ago about Isaac's son John, who fell on really hard times after his wife died,  leaving him to bring up  five small children. By 1837 he was struggling to stay on his small farm in nearby Sutton because the authorities were trying to have him moved back to his previous district, to save providing poor relief for the family.The story can be read by clicking here
[I am grateful to Dennis Harker of Cowling and Joan Tindale of the Moonrakers website for their help with this article]
Email ThisBlogThis!Share to TwitterShare to FacebookShare to Pinterest