Bancrofts at "The Queen's Garden Party" !! 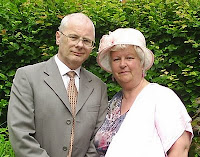 I know that I try and keep articles on this blog confined to family history matters….but I just cannot contain myself on this occasion and have to tell all my readers that Sue & I recently had the honour of being invited to the Queen’s Royal Garden Party at Buckingham Palace.
Here’s how the day went:

We arrived outside the Palace front gates on a lovely warm afternoon at the time given of 3.00 o’clock to join the queue of several hundred others waiting to get in. Most of the gentlemen were wearing lounge suits, but some were dressed in military or national dress and some had even gone to the trouble of hiring a morning suit. The ladies all wore hats of all colours, shapes & sizes, although I cannot say I saw any that were ‘over the top’ as you sometimes see at events such as Ascot.

We all passed through security and had to show identity documents to prove who we were, and were then lead into the gravel courtyard and then through the carriage arch, often seen on television when the Queen is greeting important people coming to see her. Another queue as we entered the Palace itself, and then we were inside!… lush carpets, enormous portraits hanging on the walls of monarchs of the past, and gold leaf everywhere.

We were then ushered through the Bow Room into what is called “The Garden” which has to be one of the greatest understated descriptions of all times. The gardens actually cover 40 acres of parkland and lake originally started by James I in 1609, and have since been extended and altered over the centuries by each monarch. It’s hard to believe that this setting is right in the middle of London. As we walked from the West Terrace at the rear of the palace onto the lawn there were two military bands playing light military tunes and more contemporary stuff by the Beatles and even the Whitney Houston song “ I will always love you”. It was wonderful just to stand there soaking up the atmosphere…the people all dressed up… the setting…. the music… all on a warm summer’s day….fantastic!

Nothing much was due to happen till 4.00 o’clock so we decided to have a look for something to eat & drink from a large marquee on one side of the lawn. In there was a choice of neatly cut sandwiches of different types, including, you guessed it, cucumber!.. all with the crusts taken off, together with lots of other little savoury crackers covered in such things as cheese and smoked salmon. There were also lots of dainty cakes and other sweet things covered in strawberries and cream for anyone with a sweet tooth. Of course, no alcohol was available, so it was either a soft drink or tea/coffee. Having filled ourselves up with royal grub, it was nearly 4.00 o’clock, which was the time when Her Majesty was due to appear, and at the required time things started to happen on the Palace West Terrace.

The Palace Equerries appeared, and in a discreet way gradually formed three corridors within the crowd, for the individual royal families to make their way down. Certain of the guest had also been picked out earlier to speak to the Royals, and they were positioned in the empty space within the corridors. Then the Yeomen Of The Guard came out of the Palace followed by Her Majesty, Prince Philip, Prince Charles & Camilla, who all then made their way separately down one of the three corridors. As they made their way individually down the rows of guest, they would stop to talk to the guests who had been earlier pulled out and also stopping to talk to anyone else who caught their eye. Obviously security men were hovering around, but not obtrusively, and we could all get almost within touching distance of them and listen into the conversations they were having. All the Royal Family seemed very relaxed and at ease, chatting to everyone and seemed genuinely interested in what the guests were saying to them. This whole process took about an hour and then the Royal Party headed for what is known as the Royal Tea Tent where they then spent time speaking to more people, and having something to eat and drink themselves, still in full view of everyone.

Just before 6.00 o’clock the Royal Party started to make their way back to the Palace, walking back through the crowd to the sound of the band playing the National Anthem. We all then made our way back though the Palace, retracing our steps back to the front gates, to be seen by all the London tourists with their cameras sticking though the palace railings taking photographs of us all, just in case they recognised us later as some sort of a celebrity!

Royal Garden Parties have been held at Buckingham Palace since the 1860’s, when Queen Victoria instituted what was the known as ‘breakfasts’, even though they always took place in the afternoons. There are three Garden Parties in the month of July and several thousand guests attend each one.

My main memories of the day were…The atmosphere in the Palace & the Garden on the summer’s afternoon….The sound of the Bands playing….The sight of so many people all dressed up and having a good time….and of course seeing Her Majesty and the other Royal Family members.

What a memorable day!


God save the Queen!
Email ThisBlogThis!Share to TwitterShare to FacebookShare to Pinterest

Just want to say what a great blog you got here!
I've been around for quite a lot of time, but finally decided to show my appreciation of your work!

Thumbs up, and keep it going!