Here is an interesting but sad story about a man called Martin Bancroft, born in 1871 at Ovenden, near Halifax who started a life of crime at an early age of about 13 years of age, when he was found guilty at Halifax Petty Sessions of stealing pigeons.
He was the son of a John Bancroft, an out of work stoker on the 1881 census and Ellen [ne Sutcliffe]

Martin’s first brush with the authorities were when he appeared in Todmorden court on 3rd January 1884, aged only 13 years, where he was ‘whipped’ or birched and find £1 for the theft of pigeons.
A sentence which including whipping a 13 year old child may seem extremely harsh today but in 1884 this was not an unusual punishment.
Judicial birching in 19th-century Britain was used much more often as a fairly minor punishment for male juveniles, typically for petty larceny, than as a serious penalty for adult men. This was applied to boys aged up to 14 in England and Wales, and up to 16 in Scotland. In this juvenile version, the birch was much lighter and smaller, and the birch was administered privately by a policeman, usually immediately after the magistrate's court hearing, either in a room in the court building or at the nearest police station.
However, despite the whipping, Martin did not seem to learn from this experience because 9 months later he was in court again at Todmorden for stealing other poultry. This time he was given one month’s custody and sentenced to be whipped again.

Within 3 months he had done it again, and this time appeared in Rochdale court on 12th January 1885, pleading guilty of stealing a goose this time, for which he was given 1 month in a Youth Reformatory. It seems pretty clear that these offences must have been committed out of desperation for food, for it continued because after a gap of 4 years he appears 4 years later in Halifax court for the theft of 2 chickens and a pigeon, although by now he is using the alias of ‘Joseph Ackroyd’. This time he was sentenced to 3 months and 6 weeks consecutively for the 2 separate offences. The fact that he was now using an alias is probably because he was hoping if he was caught again the authorities would not link him with his earlier record, but it did not work because over the rest of his life he used other names as well. The only ones we know for definite are Joseph Ackroyd, John Smith and William Roberts.
He continued to offend, stealing various poultry each time in  1896 1899 and 1900, again presumably to eat.
Martin seems to have tried to go on the straight and narrow, because in 1891 at the age of 20 years he tried to join the army  in the West Riding Regiment, when his occupation was given as a ‘Fireman’

However this change in his lifestyle did not seem to last very long because very shortly after signing up he was found to have given false answers on his attestation papers when asked if he had ever been sentenced to a term of imprisonment. His answer was 'no', and when this was discovered he received a further term of imprisonment of one month

By 1892 he was in court again in court at Preston, convicted again of stealing poultry and pigeons.
Whilst Martin continued to offend into his adult life, his crimes, other than stealing poultry to eat were mainly shop and house break ins, for instance in 1902 he was convicted of a Counting-House break-in, which today we would call a Bank, and was sentenced at Leeds to 3 years ‘penal servitude’, which was the term in those days of imprisonment with hard labour.

His occupation on the following prison record is a ‘Stoker’, and the record also shows other interesting information about his description such as:
Height: 5’ 6”
Hair colour: light brown
He had a blue dot on his left wrist,
The number of previous convictions,
His two other alias’s
The other prisons he had previously served in…Preston, Strangways [Manchester], and Maidstone

His offending was far and wide, initially in his local area of Todmorden, but then spanning out to Leeds, Preston, Rochdale, Salford, Maidstone, probably these were the areas where he had been imprisoned and then started re-offending on his release.


Looking at the records, it seems as though Martin died on the Isle of Wight in late 1920 at the age of only 49 years. I have been unable to find exact details about the circumstances of his death, but it most likely was while he was servicing another prison sentence there.


To finish this sad story, here is a prison record showing just some of his convictions, which paints a sorry picture of this man’s short life, offending from the age of 13 years. 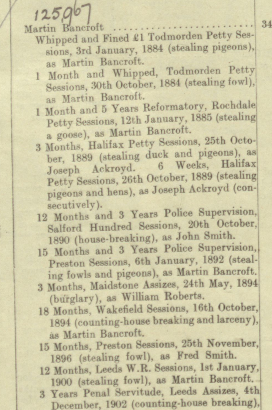