This is the story of  a Wilfred Bancroft who died in WW1, and was a local hero in his home district of Southowram, near Halifax in Yorkshire after being awarded the Distinguished Conduct Medal.

[The only picture available of Wilfred is this rather grainy one from the Halifax newspaper of the time.]

Wilfred was the son of Arthur and Elizabeth Bancroft and was born in 1895 in Halifax, Yorkshire. His father was a tailor, and the family moved away from Halifax to Lincoln around 1900. The 1911 census shows Wilfred, with his parents and six brothers and sisters living at 58 Princess Street, Lincoln, with Wilfred’s occupation listed as a ‘Moulder’.

However before the outbreak of WW1 in 1914, the family had moved back to Halifax, because the following attestation papers show Wilfred's address as School Lane, Southowram, Halifax when he enlisted in the West Yorkshire Regiment on 27th October 1914.

Military records show his rise through the ranks was fairly swift, because by April 1916 he had been promoted to a Corporal, and a month later in May he was made a Sergeant.


Wilfred's early service was not without danger, as the following casualty report shows. He was hospitalised several times between August 1915 to November 1916, with a shell wound to the head and also with rheumatism....a common complaint with soldiers spending long periods in the trenches.

Wilfred was official awarded the Distinguised Conduct Medal [DCM] on 14th March 1916 for what was described as ‘conspicuous gallantry’ on 14th December 1915 when, during the gas attack and under heavy fire, he went over the top from the front trench to his Commanding Officer to report the state of affairs.

The full details surrounding Wilfred's bravery, which merited the DCM, were described as follows in military records:

"At length Lieut Marshall decided to send a messenger to Battalion H.Q The way lay across ground which was swept by machine gun fire ; only one bridge was left over the canal and that was being heavily shelled. It required no mean courage to volunteer for such a mission. Just then Pte W.Bancroft crawled into F35 with a report from Sec.-Lieut. W. N. Everitt. This man knew well the dangers of the journey for he had been with Sec.-Lieut W. E. Hinton, when the latter had been wounded on that very ground only a few days before.Yet as soon as he heard what was wanted, he offered to take the message. He reached Battalion H.Q. unhurt delivered his message, and supplemented it with a very clear report of his own. He then returned to Lieut. Marshall with a cheery message from the Commanding Officer, and afterwards crawled back to his post in F34. Few Distinguished Conduct Medals have been better earned than the one he received for his gallantry on this occasion.”
[In the margin of my copy in pencil is written very true and the initials look like JBM]

From an article in the Halifax Courier newspaper it seems that was quite a local hero. Earlier that year on 17th February1916 , Wilfred had been home on leave and was honored by the inhabitants of Southowram, when at a gathering at the Mechanics Institute he was presented with a wrist watch, comb and case, pocket wallet, cigarette case and pipe….the gifts being in appreciation of his bravery, which marked the fact the he was the first person in Southowram to be awarded the DCM.
The paper then reported on the incident of the previous December when Wilfred
'had taken the message to headquarters, it being an exceeding dangerous journey over a considerable distance, where he had to adopt various tactics to get through the Germans because it was daylight and he was fired upon both with rifles and machine guns.‘His perilous adventure was a means of saving the situation’.

Then later that year in September, his mother had received one of those letters all families dreaded from his commanding officer saying
“I am sorry  to be conveying the news that after taking the 1st line trench, we were driven out, but Wilfred never came back. I am strongly hoping that Wilfred had been taken prisoner,…. he had been a hero many times, and everyone thinks a great deal about him.”


Sadly Wilfred never did came back, and was not taken prisoner either. His Army Medal Index Card shows him 'pres [presumed] dead on 3/9/16'


He died at Schwaben Redoubt, which was a German strong point near the village of Thiepval in France and had been under bombardment by British troops for some time. On the 3rd September, when the 49th (West Riding) Division attacked the area from the west in a morning fog, they crossed no man's land but were defeated, when German artillery and machine gun fire swept the British troops and German infantry counter-attacked from the flanks, using hand grenades. Wilfred was hit by one of the enemy grenades, and failed to make his way back. His body was never recovered, and he is therefore commemorated with all the other fallen at the nearby Theipval Memorial.

After the War ended, Thiepval had been chosen as the location for the Memorial to the missing to commemorate those who died in the Somme sector before the 20th of March 1918, many thousands with no known grave. This is the largest and most imposing of the Memorials and at the time of the unveiling in 1932 there were 73,357 names of fallen or missing soldiers.

More locally, Wilfred is also listed in his home town at the Southowram War Memorial. 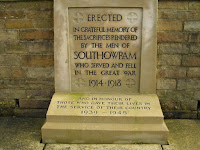