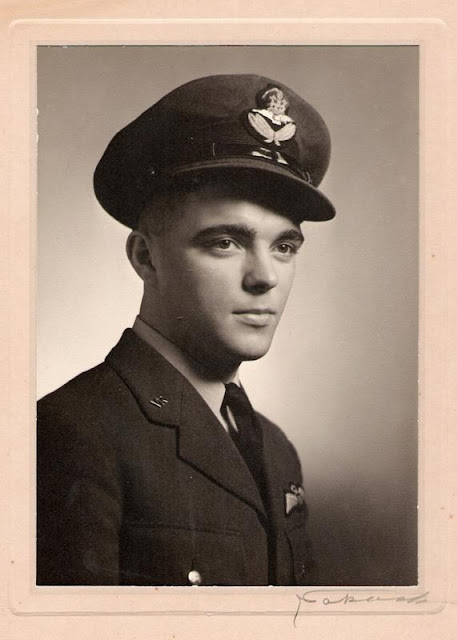 I was recently given a press cutting from our local newspaper from 1943,which was reporting on the death of Joseph Wallace Bancroft in an aeroplane accident in Canada during World War Two, whilst serving in the R.A.F. as a Pilot Training Officer.

Joseph was born in 1921 at Sutton, Near Keighley the son of Alfred and Annie Bancroft. His father was employed in the textile trade and the whole family went out to India when Joseph was a small child because his father got the job as  the manager of the Cawnpore Woollen Mill. He returned to England at the age of 10 years and obtained a scholarship at the Keighley Boys Grammar School. On leaving school he became articled to a firm of accountants in Bradford.

During World War Two he volunteered for service in the R.A.F in February 1941, and was sent out to the Estevan Airbase in Canada to train and after a short period of training he was granted a commission in the R.A.F and was retained in Canada as an Instructional Officer. During World War Two the airbase was part of the British Commonwealth Air Training Plan.
﻿
﻿﻿
﻿﻿ ﻿The story of how the R.A.F came to be at Estevan in Canada is an interesting﻿﻿ one. Initially a different site was chosen for the Airbase at a place called Swift Current, because the Estevan site was only about half a mile from the US boundary and was therefore felt to be a security risk. It took a personal intervention of the local mayor before Estavan was given the go ahead in late 1941.The cost of setting up the base came to three million dollars and by April 1943 was up and running to commence training with about 54 RAF officers and almost 800 airmen and other ranks on site. A list of aircraft in use initially was 32 Avro Anson 1's, 84 Avro Anson 11's and 14 Menasco Moths in reserve.
It seems that much of the pilot training was real "seat-of-the pants stuff" as is explained by some interesting comments made by an aviation historian, Mr J.M. Bruce "When I was an instructor in Canada, we heard of another instructor at Estevan, Saskatchewan who did the whole session of circuits and bumps with a pupil with only the port tailplane and elevator attached. The starboard surfaces lay on the airfield near the end of the runway, and the instructor and pupil were highly amused when looking down from the air, to see that someone had lost half a tail. They were less amused when they landed and got out of their Anson, to find the surfaces belonged to their own machine!"

By 1944 the war overseas demanded fewer pilots and more navigators, so the airbase was gradually disbanded, and in the week prior to closure, the remaining airmen attended a service at the nearby church in Estavan in memory of those who had died at Estevan Airbase.


There were many incidents at the airbase, one being when more than 20 personnel of the Royal Canadian Air Force were killed at the airport when their C-47 plane, carrying them back to Canada from the US (to which they had been ferrying surplus military trainers) crashed on the airport.

It was in the summer of 1943 that Joseph was on an air test with four ground crew on board. He was piloting an Avro Anson plane, number 3582, when for some unexplained reason it crashed in a low flying area of the Estevan airbase, and everyone on the aircraft died in the accident. Unfortunately little is know about the cause of the accident.

All the men who died in the accident are buried at the Estevan Cemetery.

﻿﻿﻿
Thanks to Doug Gent for letting me use this picture of the cemetery sign and Joseph's gravestone. Click here for his excellent website on Estevan Cemetery
Email ThisBlogThis!Share to TwitterShare to FacebookShare to Pinterest

For the exelent information

This is a message for the webmaster/admin here at bancroftsfromyorkshire.blogspot.com.

May I use some of the information from this blog post above if I give a link back to this website?

I really like your blog and i really appreciate the excellent quality content you are posting here for free for your online readers. thanks peace sandro

Hi! Thank you so much for posting this! It's helped immensely in trying to trace family history.

I've never seen any pictures of him, or heard much about him either - unfortunately my grandfather died in 1973 in an accident before I was born and my grandma doesn't know much about his side of the family.