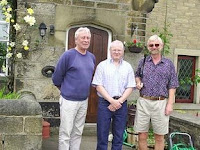 As Bancroft researchers will know, there has been lots of speculation over the years about the origins of our line, which comes to a full stop at Joseph Bancroft who married Grace Greenwood. He died at Far Oxenhope, and was buried at Haworth in 1785.
A fellow researcher, Michael Northrop, contacted me recently with his thoughts, which on reflection might be correct, as the dates etc fit the period in question.
The picture opposite shows, Michael & myself together with another researcher Jeff Wright from the US, who all met a couple of years ago and are seen outside Hoyle House in Oakworth, the one time home of Joseph Bancroft’s son also called Joseph in the early 1800’s.

What started Michael thinking again was the recent article on this blog, which mentioned the habit in times gone bye of families using the letter ‘o’ to denote ‘son of’, for example “ Joe ‘o’ John ”. Michael was reminded of a one-time conversation he had with a family member who mentioned that as a child she was taught to recite a rhyme about her ancestors in time to her father tapping it out using the poker on the hearth.
The rhyme ended “Dode o’ Dode o’ Tim” [Dode being a nickname for Joe/Joseph]. This got him thinking again, and based on other information, he came up with the following possible family line:
----------------------------------------------------------------
A Joseph Bankcroft is known to have been living in the Stanbury area because this is mentioned in the Haworth Parish records when his son, Timothy was baptised on 14th June 1761. Our Joseph who died in 1785 also had his surname spelt Ban’k’croft.
Earlier that year on 5th April 1761 a John Bankcroft, also from Stanbury had his son also called Timothy baptised again at Haworth.
It is significant that both John & Joseph lived at Stanbury, and both had their surnames spelt with a ‘K. It is quite possible that they were brothers, although there is no evident to confirm this, and no record of their birth dates. We wonder if both these were the sons of a Timothy, who named their son’s after their father?
There is also an entry on the LDS website showing Joseph’s death date in 1785, and a baptism year of 1727 at Haworth, but with no further information to substantiate this.

A Timothy Bancroft lived in the Stanbury area during part of his lifetime. We know that this person died of “the decline” in his 90th year, because the parish records state this, and we also know that his first wife Sarah Holm[e]s died in Stanbury in 1760. He later remarried Grace Murgatroyd later in 1760 and she died in 1788, both marriages took place in Halifax, and both wives were later buried at Haworth Parish Church, presumably because their husband Timothy had moved over to the Keighley/Haworth area at some point in time, but was originally from Halifax area.
There is no record of Timothy’s baptism, but we can assume from his burial record that he was born circa 1700.

Moving over to Halifax area, a Tim Bancroft of Warley was married twice, firstly to a Sara [h] Wilson, who died in 1698, and then to an Elizabeth Hodg[e]son.
They had a son called Jo born in 1710 at Halifax, and it is this Joseph who we have always assumed was the Joseph who died in 1785. We are now wondering if this Tim & Elizabeth might also have had another son called Timothy, who’s baptism records are missing, and who was born in Halifax but later moved to the Stanbury area and is the same Timothy who died in 1790 somewhere in the Keighley Parish area, which covers Stanbury.
I accept that there is a lot of supposition and speculation in all this, but the dates do fit into the times we are looking at.
So to sum up the line would look as follows:


I would welcome any comments on this subject from fellow researchers. You can e-mail me on:
jbancroft1@btinternet.com
Email ThisBlogThis!Share to TwitterShare to FacebookShare to Pinterest