The “lost” grave of Jabez Bancroft


For many years I search in vain to find the grave of a Jabez Bancroft [1845-1898] in the local Wesleyan Graveyard at Dockroyd in Oakworth near Keighley, but because the graveyard had been neglected for many years, and was tremendously overgrown with ivy, brambles and trees, it proved to be a hopeless task….but then everything changed!

The graveyard has recently been bought by a person, Andrew Heaton, who has ancestors buried there and as well as restoring it, Andrew hopes the local community will one day take over the maintenance of this important feature of our village as it is of significant historic importance to the residents.
The Graveyard, according to Chapel records, has 725 graves, many without gravestones, in which are buried 2452 named people including a significant number of infants. A sad fact of Victorian life in the village is that there were 449 children buried at the site who died under the age of five, as well as 123 unnamed infants who were either stillborn or died before they were named, which is a staggering 23% of the occupants of the graveyard. The last burial there took place in 1968, and as the restoration continues I feel sure that more interesting facts about the people buried there will be unearthed.


There are names of twenty one Bancroft individuals buried there, although only one grave is marked with a gravestone, that of Jabez Bancroft, b1845, and some of his family. By coincidence there is another Jabez Bancroft [b1839] buried in the same graveyard, who was his cousin and because they were born within a few years of each other, research was not easy. 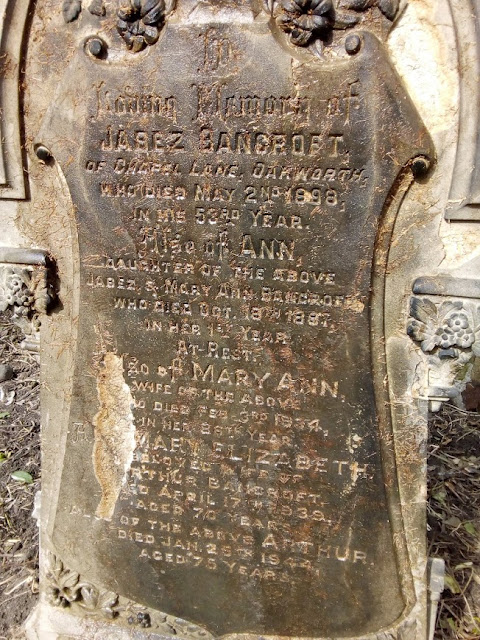 In loving memory of
JABEZ BANCROFT
of Chapel Lane, Oakworth
who died May 2nd 1898
in his 53rd year
Also of ANN
daughter of the above
Jabez & Mary Ann Bancroft
who died Oct 18th 1887
in her 1st year
At Rest
Also of MARY ANN
wife of the above
who died Feb 3rd 1934
in her 86th yea
Also MARY ELIZABETH
beloved wife of Arthur Bancroft
died April 17th 1939
age 70 years
Also of the above ARTHUR
who died Jan 25th 194
age 75 years

The gravestone, although damaged by the weather and time, has some beautiful carving on it, as shown below, including a hand with the finger pointing up to heaven! 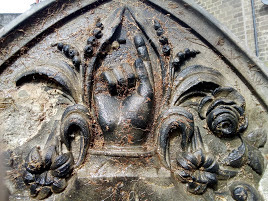 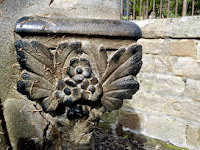 The graveyard was closed in the 1970s because water was finding its way into the area due to a nearby school being extended, and a pond in its ground being filled in.

More about the Wesleyan Chapel and Graveyard later, but in the meantime here is the details I have on Jabez, who from family tales passed down the generation was quite a character.
Jabez was born on 5th May 1845 in the Crossroads area near Keighley, although it is listed as in the Bingley Parish area, the son of Michael and Ann Bancroft. Michael is shown on census records as being a weaver and later a woolcomber and a milk dealer, who had eight children with his wife Ann.

Jabez was married twice, firstly to Mary Hannah Wood Williamson on 24th December 1866. [Christmas time was a common time for marriages, not for any religious reason, but usually because that was one of the few times that couples could get time of work!] They went on to have two children, but sadly Mary Hannah died at the young age on 23rd January 1874.


The story then past down the family folklore, showing Jabez in a less than flattering light, as it was rumoured that he proposed to his second wife, Mary Ann Berry, on the way home from his 1st wife’s funeral, although to be fair to him, this may have been the actions a young father desperate to find a willing woman to look after his young family. Anyway whatever the reason, they decided to wait a little while, as propriety at the time dictated a period of mourning to stop wagging tongues in the village where everyone knew everyone else. He married for the second time just under four months after he buried his 1st wife on 19th May 1874. This marriage took place quietly, not in a Chapel or Church but at Keighley Register Office, probably because this was away from the prying eyes in the village. Jabez went on to have a further six children with his second wife.
Quite a bit of mystery surrounds some of his children. One son Edwin, b 1879,a shoemaker sometimes known as a cordwainer at the time, seems to have left his wife and vanished off the scene without trace sometime after the 1901 census. Family rumours have him as disappearing to somewhere in South Yorkshire, and then disappearing again altogether. No one seems to know the reason why he left his wife, or why she reverted back to her maiden name, and she then had a child using the same surname.....maybe the child had something to do with them splitting up....no one knows.
Another son, Isaac,b 1883, is a bit of a mystery man, who changed his name to John Stevenson, and
did a 'moonlight flit' to Philadelphia in the US sometime between 1910-1915, and was never heard from again by the family. No one knew why he  changed his name and disappeared so mysteriously, but speculation was that it was either because of the law, a domestic incident or else fear of being called up for the war. The only reason I mention this is because he was also a shoemaker, and it might be that Isaac, like his brother Edwin, was trying to get away from a difficult marriage...who knows?
Another of Jabez's sons, Joseph b1875, at the tender age of 10 years found work in a mill in Keighley and therefore had to walk the three miles to work and then three miles home after a long day a’t mill…at 10 years of age!
Anyway, enough of all this speculation, going back to Jabez’s life at home.

Jabez was born on 5th May 1845 at Crossroads in the Bingley parish. His parents were Michael and Ann [ne: Shackleton[] and his parents decided to get him baptised at West Lane Chapel in nearby Haworth

The 1861 census shows the whole family living at nearby Bocking with Jabez listed a worsted Spinner at the age of 15 years. I suspect that this was not his first job at the mill, as most children started at an earlier age usually doing fairly menial tasks such as ‘doffing’.
By 1871 Jabez had married Mary Hannah and the couple were now in Edward Street, Keighley with two young children, and he had a job as a stone mason, which must have been a big changed for him from the world of mill workers that he was brought up with.
The 1881 census shows him now living at Bocking again, with his second wife Mary Ann and the family of five children, and still working as a stone mason.

The final census showing Jabez is 1891 where he is now living with his wife and six children at Chapel Lane in Oakworth, which was directly opposite the graveyard, and he is listed as ‘Chapel Keeper’.

The records from the Oakworth Methodist Chapel show that he was the Chapel Keeper or Sexton from 1884 to his death in 1898.

The duties of a Church/Chapel Sexton were many, and usually entailed the maintenance of the Chapel and area around it, as well as managing and maintaining the graveyard which usually included some grave digging, and there is evidence in the Chapel records of Jabez digging graves with his name shown next to some of the grave details.
Jabez died on 3rd May 1898, just before his 53rd birthday, at his home in Chapel Lane Oakworth, very close to the Chapel and graveyard he had looked after for fourteen years.
After Jabez’s death the job of Chapel Sexton was taken over by his son Arthur from 1898-1939 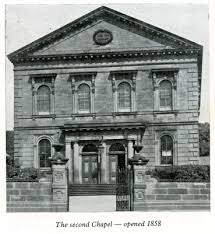 The Chapel itself was an imposing building first opened in 1858, and was in fact the second Chapel on this site. It was built with financial help from Sir Isaac Holden, the local industrialist who lived in Oakworth House, a magnificent mansion next to the chapel site. In fact Sir Isaac had his own private door at the side of the chapel, in order that he did not have to enter from the main entrance with the rest of the public.   The original chapel had been a much smaller affair built in 1822, but as the congregation increased a bigger building was required and so this new chapel was built with a capacity of 977 worshipers. Numbers however never reached the expected levels and at a peak it had 347 members in 1889, and then numbers steadily declined until it was decided to close the chapel in 1957 and replace it with a more modest building incorporating the Sunday school, which had previously been housed in an equally large building nearby. The new Chapel is still in use today and is a thriving centre in the village


I am grateful for Andrew Heaton providing much of the information for this article. For more details about the graveyard and details of the restoration, please go to Andrew’s website here:
Since writing this article, the Keighley News has written a piece about it which can be read here: