When Trolley Buses ran in Bradford


Here's a trip down memory lane for me, and I suspect many other Bradfordians, with memories of my early years growing up in Bradford. Whilst going through some old photos recently, I was reminded about the early 1960’s.... going to and from school on local public transport at the time…the electrically powered Trolley Bus!

Looking at public transport today, the Trolley Bus might seem a modern, clean, efficient and ecologically friendly means of travel, and indeed this transport system is still in in use throughout the world to this day, but in 1960’s Bradford, it seemed a very old fashioned way of travelling to me, as a young lad looking at stories of the time on TV of astronauts travelling in  rockets into space.

My journeys to and from school were always on the Trolley Bus in winter, when the weather was too bad to go on my bike, and I remember how quiet and smooth the buses were, being run by an electric motor instead of an diesel engine changing gear all the time.

All would go well until one of the two poles came off the overhead wire, and then the conductor would have to get off, go to the rear of the bus and pull out a long pole with a hook on the end, which was carried in a tube under the bus. He would then have to hook the contact rod on the bus roof, and place it back on the wire overhead….no health and safety procedure in those days!

I can still remember the interior of the later model buses, which were fairly basic, to say the least. Not much heating and vinyl seats, which although very hard wearing were not very comfortable, especially on a winter's morning for a schoolboy who was still wearing short trousers!

Yet another task the conductor needed to be carried out at some road junctions and the terminus was to to get off  and manually pull a handle, sometimes called a 'Frog', on the pole at the roadside to move the wires across, similarly to a set of train line points, so the bus could go around the corner onto a new road or into the terminus, The picture below shows the conductor pulling the frog on the Thornton route at Four-Lane-Ends…nothing was automatic then.

Another memory I have is when on one morning on the way to school, we were suffering from heavy smog in the air. Bradford had lots of bad smog days, due to the high pollution in the area from all the wool mill chimneys [over 100 at one time]. All these mills were belching out black smoke from burning coal, and it was sometimes so bad you could hardly see your hand in front of your face! Anyway, it was so bad on this particular day that the driver could not see where he was going, to such an extent that the conductor had to get off and walk in front of the bus waving a white handkerchief.

I can also remember always seeing vehicles such as this one all around the area, with a gang of workmen repairing broken wires, which seemed to be a regular occurrence.


Bradford in fact, was the last city in the country to use Trolley Buses, and time finally ran out for them in 1972, when the Council's Transport Committee decided to move over to a more modern form of public transport without the need for overhead wires.

For anyone not familiar with this form of transport, a trolley bus is an electric bus that draws its electricity from overhead wires using two spring-loaded trolley poles. Two wires and poles are required to complete the electrical circuit, unlike a tram or streetcar, which normally uses the track as part of the electrical path and thus needs only one wire and pole. Bradford’s Trolley Bus system was a follow on from the earlier Tram system, and because it did not run on tracks, it was know in its early days as the “Trackless”. 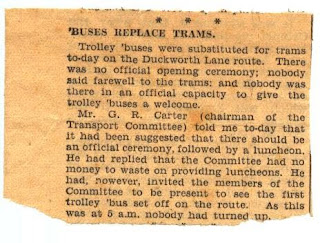 The Bradford trolleybus system served the city of Bradford for much of the 20th century. It was one of the first two trolley bus systems to be opened in the United Kingdom along with the Leeds system. Both systems commenced operations on 20 June 1911, and as far as Bradford Councillors  were concerned, the move from Tram to Trolley Bus was a bit of a none event, as the enclosed newspaper clipping of the time reported.... The first Trolley run was at 5am, so no one from the Transport Committee bothered to turn up!

The Bradford system lasted the longest of all the UK's urban trolleybus systems. Having been one of the first such systems to open, it finally finished on 26 March 1972. Just before its closure, it also held the distinction of being the longest-lived surviving trolleybus system in the world. 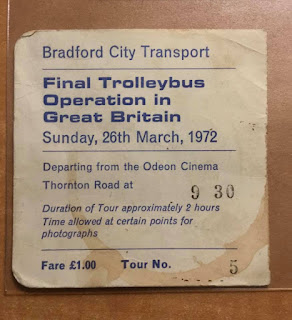 Many of the former Bradford trolleybuses are now preserved at various locations around the UK. The last one to run in Bradford, number 884, on the Thornton route, is usually housed in the Keighley Bus Museum, and there are others on display in Bradford's Industrial Museum.


The is a very informative 8 minute film on-line, which shows the last Trolley Bus journey on Bus number 844, and gives a vivid insight into what it was like to drive and ride on a Trolley Bus, together with a commentary by retired drivers and passengers. It can be viewed by clicking here. [courtesy of the Yorkshire Film Archive]


Since the demise of the Trolley Bus service in Bradford, the system has flourished elsewhere. Today around 300 trolleybus systems are in operation around the world, in cities and towns in 43 countries