The Minster in the Hills - Part 2 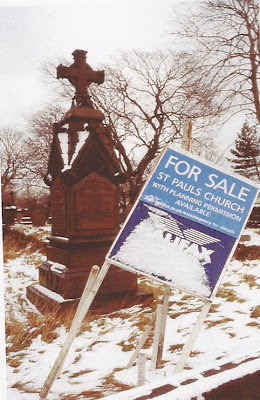 Following on from last month’s article about St Paul’s Church in Denholme, which can be read by clicking here, I now bring the story up to the late 1950’s when I appeared on the scene.

My involvement with St Paul’s started in the autumn of 1958, following a Harvest Festival Concert at my Junior School at Keelham. Reverend Sydney Hailes, the vicar of nearby St Paul's at the time, had been invited as a guest to say a little prayer at the end of the concert with all the children. I had a small singing part in the concert, and was spotted by him as a possible new recruit for his Church Choir, so he sought permission from my mother, there and then, and I was in the choir the next Sunday after the weekly choir practice.

The rather shaky picture below shows me as a proud  9 year old on his first Sunday in the choir, suitably dressed in surplice and cassock.

I had of course to go through the unofficial “Initiation Ceremony” in the dressing room on my first Sunday, carried out by the rest of the choir, which meant standing under a shelf in the changing room, and having a vary large bible dropped on my head….it didn’t hurt much, as far as I can remember!

Here are some more of my many happy memories of times in the choir over the next couple of years…..
The annual Christmas Carol Concerts, which we seemed to practice for weeks before we got it right, and then performing to the largest congregation of the year in the church.....a quite magical time of the year for a young boy like me.

The annual Jumble Sales in the Sunday School building across the road with all the mothers queueing up outside pushing and shoving to get in first, in the hope of bagging all the bargains!... The accumulation of items for sale was sometimes little short of amazing, including some heavy articles, pieces of furniture, and one year even a piano turned up!....the wonder was how it all arrived, and how was it going to be taken home!


The annual choirboy's outing was always something special….in those days we did not seem to have any choirgirls as far as I can remember! As members of the choir, we did not receive any payment for the twice Sunday service, although I seem to remember getting the princely sum of 5/- [25p in today’s money] if we were called upon to sing on a Saturday at a wedding, so because of the lack of payment we were treated once a year to an outing, paid for out of Church funds, which was something we looked forward to for months beforehand. One year the outing was to Bell Vue Zoo in Manchester, with Rev Hailes leading us all, and trying to keep some sort of order amongst this rowdy rabble of young boys, who had been let loose on this exciting expedition into the unknown! We were all herded towards the monkey house by Rev Hailes, to see this new attraction. Unfortunately Rev Hailes got a bit too close to the bars of the cage and in a split second one of the monkeys put it's hand through the bars and snatched the spectacles of Rev Hailes face!....The boys were all falling about laughing, as we watched the monkey trying to put the spectacles on it’s face, and wondering how, and if,  it was going to give them back to Rev Hailes, who was waiting patiently by the bars, more in hope than expectation and  probably saying a silent prayer for  the monkey to return them. Luckily an attendant had seen the whole incident and came over to reassure Rev Hailes that this was a common incident and not to worry. He then went into the cage and retrieved them, and we then all had weeks of laughter, recalling the incident to everyone at  Sunday service.


I remember once climbing the steep steps up into the bell tower one Sunday as the bells was being rung….my head vibrated for ages afterwards from the sound of that bell. Here is a picture in the bell tower taken in 1965, showing the main bell weighing 17 cwts, at a time when a problem had been found with rot in the main supporting beams, and urgent repair work needed to be carried out. 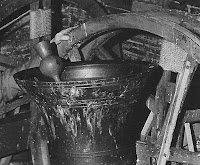 I can also remember one particular winters night, when I trudged through the snow to get to Evensong for 7.00pm, thinking surely no one will turn up in the congregation that night, and Rev Hailes might just decide to send us all home, after saying a little prayer to the Lord…..I was wrong!…that night just one single gentlemen turned up!...so as Rev Hailes marched us all down the isles, he stopped and invited the only member of the congregation to join us and we all sang our hearts out together at the front in the choir stalls

The year of 1959 was an important year for me…my first acting role in a pantomime. After many hours of rehearsal, I was ready for my first minor part in Aladdin!...here I am in full theatrical dress, including a red nose, second from the right in the front row at the dress rehearsal.
I can’t remember now what part I actually played, but I can remember vividly being prepared for this first performance on stage, as one of the make-up staff had to hold me down to put the lipstick on me.

Anyway, enough of my memories of these happy times, bringing the time-line up to 1997, St Paul's had recently celebrated it's 150th Anniversary, when dark clouds regarding the Church's future started to gather.  After having had to spend some large amounts in the recent past for the removal of asbestos, repairs to the electrics and heating system, a calculation was made that the running costs for the church were £1386 a month, and due to falling numbers in the congregation, there was only £600 a month coming in.

If this news was not bad enough, a survey was carried out on the building, and to everyone’s horror extensive dry rot was discovered affecting all the south side of the main aisle from the top of the pillars to the roof. The estimate to carry out the work needed to restore the church to a position of being usable again was over £200,000. Arrangements had therefore to be hastily made for baptisms, marriages and burials, as well as the services to be handled elsewhere in the area whilst a decision was made about the church’s future.

At a meeting in August 1997 of all the electoral roll of St Paul’s, the then vicar of St Paul’s, Rev Elizabeth Thomas said “ The fate of a church building like St Paul’s affects more than the congregation who worship in it week by week. It is a part of the heritage of the parish and holds many memories and much spiritual significance for the community…we need to examine together the options open to us and ask how the best of Christian gospel and witness, which St Paul’s was built to promote, can be best served in Denholme in 1997”

Various meeting took place that year to try and find a solution for the long term future for St Paul’s. After exhausting all the usual options of grants and support from the Church Establishment, and an appeal having been launched, which only managed to raise about  £8000, the battle was lost and the Church doors were locked and bolted forever to its parishioners. Anything from the building which could be sold, was sold, and with permission of the Church Authorities and English Heritage, the beautiful organ was removed and installed in a Cumbrian church, and the Alter, Pews and Bells were also removed.

All the magnificent stained glass windows were removed and then auctioned off, except  two which were kept, and after restoration were installed in the Denholme Shared Church. The stained glass windows shown above, and known as 'Faith Charity and Hope' raised £4800, £16000 and £7800 respectively when they were sold. These were probably the finest works of stained glass installed in the church, and were a memorial gift made in 1887 by the children of the late Benjamin Foster. They had been situated in a prime position in the south wall of the chancel, the sunlight shining through them enhanced the most sacred part of the church for over a century.

Because the repairs needed were found to be extensive, with great reluctance the building and part of the churchyard were eventually put up for sale. The Congregation eventually found a permanent home as part of the Shared Church in the village, after a Sharing Agreement had been drawn up.

As I write this article in 2012, the building has been sold some years ago, with listed building consent and full planning permission for conversion, but it still stands empty with all lower windows boarded up, all the upper windows broken, and the pigeons roosting in the bell tower…..a sorry sight indeed for someone like myself, who can remember it fifty years ago in all it’s glory.

Here are a couple of interior picture, showing the sad state it is in now, after everything of value has been removed. 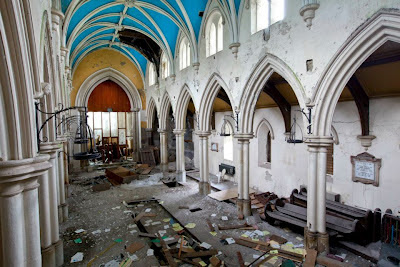 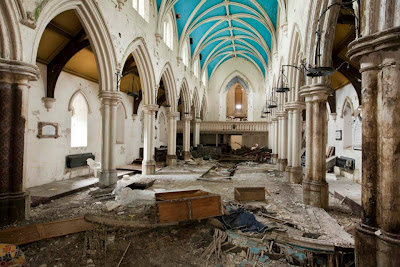 I want to finish this article with what I consider to be a beautiful winter picture of St Paul's, together with a  poem written by a lady called Ivy Wood, which captures exactly the sadness of this whole story. 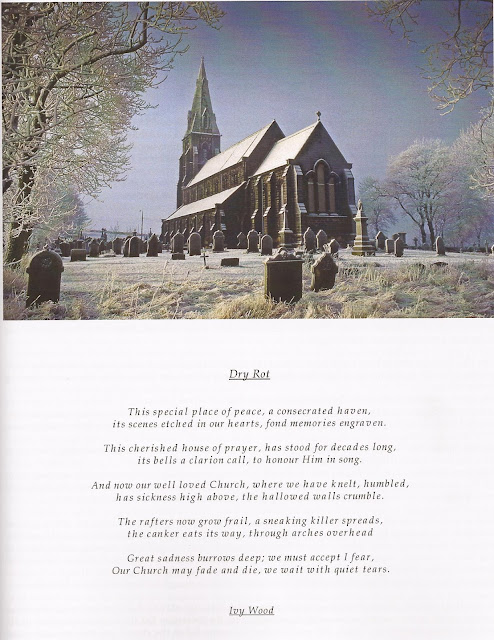 I acknowledge the book “Denholme, the Village, the People and the Minster on the Hill” by Terry Hanson, and wish to thank him for allowing me to use extracts from his book.
Postscript  May 2021
Since writting this article, the church has been bought, and renovated into living accommadation, and was subject to a TV programme which can be read here.
https://www.keighleynews.co.uk/news/19346955.dilapidated-church-1-million-home/