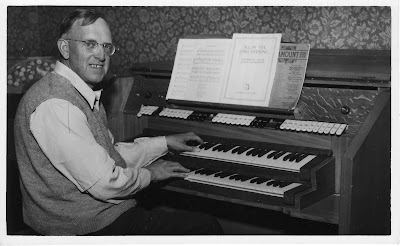 I was recently given this story about George Bancroft [1907-1996] who had a very interesting life as an electrical engineer, and who's hobbies lead to a career as a radio expert, radio manufacturer and in his later life a maker of electronic organs.

George was born in Haworth in 1907, the son of Samuel and Elizabeth Bancroft. His father was the local butcher, running his business from a shop in Haworth village and was always recognisable because of his habit of wearing breeches, gaiters and boots and always being followed by his terrier dog called "Curley".

After leaving Keighley Boys Grammar School, George went to work for an electrical firm in Bradford and his boss must have seen that young George had an inventive mind for anything electrical, because he asked him to make a crystal set.....and that's how his love of electronics began....he started making crystal sets which the firm he worked for then sold.

George had a flair for a good  electrical idea from and early age, and in the 1920's some people had a radio at home, but needed to use a glass accumulator to run it because they did not have an electrical supply to the house. These accumulators were similar to a small car battery, and needed charging regularly. He therefore bought and old generator, which he set up in his mother's outside wash-house, and ran a business from home recharging accumulators for everyone in the area.

By the early 1930, he had set up one of the earliest  radio relay business in the Haworth and Crossroads area from his home in Brow Road, Haworth. At the time many people could not afford to buy a radio for the home, so the radio relay arrangement allowed a person to have the BBC radio programme wired directly to their home, and the equipment in their house consisted of a radio loudspeaker with a volume knob, and in later years there was the added luxury of an extra  knob allowing them to listen to two different channels! At it's height, radio relay was used in over one million homes throughout the country, and locally in the Keighley area, one in six houses were connected. The cost of the service was 1/3p per week. Alternatively if you needed the equipment installing the cost of a loudspeaker was 5/3d....this then gave you 100 hours of entertainment a week!
The minutes from the Haworth Urban District Council meeting of 2nd June 1931, list his application to set up this business as follows:
"The Clerk laid before the Council a letter from Mr George Bancroft dated the 28th ultimo, asking the permission of the Council to supply people in Haworth &amp; Cross Roads with relayed wireless programs from the Central Receiving Station at 2 Spring Row, Cross Roads, the distribution to be by means of overhead lines. It was resolved that the application be granted."
At the same meeting the Council considered a similar application from an existing Radio Relay Company in Blackburn, Lancashire, and refused their application....presumably favoring a local business to operate this important service to the local community. 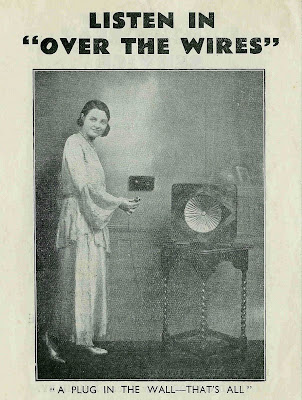 George eventually sold his radio relay business to a nearby rival company in the late 1940's. By then many people were getting their own radio sets due to the fact that many more British and Foreign stations were becoming available, so he decided to set up a new business renting out radio sets, and eventually set up another business manufacturing them from a small factory at Mill Hey in Haworth.

He had previously tinkered with television in the 1930's using his radio knowledge. The BBC at the time were using the Baird Televisor system with a long-wave radio signal, but as it was only broadcast at the time on a 30 lines format, the picture was very poor so he did not pursue this project. He looked again at television in the 1950's and  built his father a television set which was a console type, (floor standing) and of course only received the BBC broadcasts, as that was the only channel available at the time. It was eventually passed down to his sister, Clara, and when she  moved house in the mid 1960’s she disposed of it, although it was still  in working order!!

By the 1960's George turned his electronics knowledge to a completely different hobby....making electronic organs.He had first become interested in organs shortly before the war when he was intrigued by the tracker action and coupled keys of the pipe organ in his local chapel, and then went on to read books on organ building before making small electronic attachments to a harmonium and then experimenting with tone generators and filters.Here his skill in radio electronics became vital.
He always said that he would donate an organ to the first local church to place an order with him, and the picture at the top of this article shows this organ, which took two years to build, and which he donated to the Bridgehouse Methodist Chapel in Haworth. A concert was held at the Chapel in February 1964 to celebrate it's installation, and the local newspaper reported the event as follows:
" Bridgehouse Methodist Chapel received a gift on Sunday of and electronic organ, worth several hundred pounds, built by Mr George Bancroft of Haworth. Mr Bancroft said that well known organist, Miss Freda Hall, has played the organ several times and considers it is the best in the world. She describes it as the Rolls Royce of organs. The organ was installed three weeks ago as a trial and Mr Bancroft asked if the church were willing to buy it. They said they were all delighted with it, and he then offered it as a gift. Mr Bancroft said his interest in organs stated about 15 years ago and he is now employed full time making organs at his workshop in Brow Road. He is at present making one for Scunthorpe Methodist Chapel."

As his skill and knowledge developed he started to produce organs where each note had it's own generator, which was an expensive refinement at the time. In an ordinary electronic organ, identical notes from the same or different octaves, produce precise unison, whereas George's organs produced what is known as a chorus effect, where they are as in a choir, fractionally out of tune with each other. This effect brought his organs into line with a pipe organ, where there is a pipe in every stop on every note. At that time pipe organs were ten times the cost of George's organs. His organs also had other features, normally found on much more expensive organs such as the ability to produce tones similar in sound to an oboe, french horn or trumpet, and coupler controls which made a note sound one or two octaves higher or lower, thus producing an orchestral effect in both tone and volume


George continued with his hobby from his home, and the following picture shows him hard at work in his little workshop where he produced up to four organs a year, mainly going to private houses or small chapels. 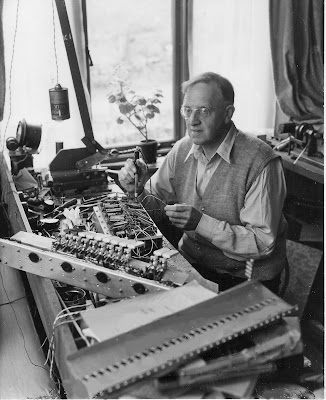 George had married [Ellen] Marie Moon in 1938, after a chance meeting when they were both passengers on a Norwegian Cruise, and they had a long and happy marriage. When they reached retirement age in the mid 1960's, they moved Wigtown in Scotland because George had fallen in love with the  the area when visiting the nearby grammar school camp as a boy, and it was also convenient for travelling across to Northern Ireland where Marie had originated from. They finally bought "Clintz House" which was the old jailhouse in Wigtown and was in a pretty poor state when they purchased it. Being a listed building, it took a lot of time and expense to bring it up to a satisfactory condition, and here is a picture of how it looks today. 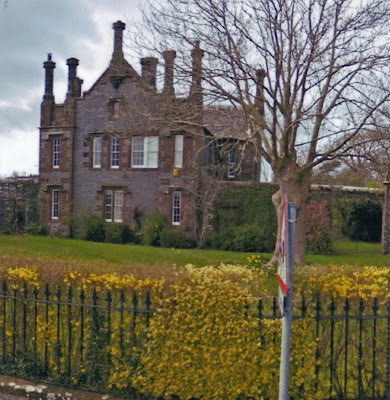 Even during retirement, George continued to move with the times and keep up with technology.In the early 1970's a neighbour's son who worked for a publishing company, asked him to make a small organ which could be used abroad, so George designed the following transistor organ which eventually ended up in Johannesburg. 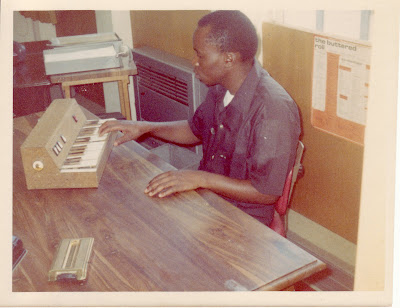 George built his last electronic organ when he was 82years old, which was a two manual instrument with bass pedals. He had this organ with him in a nursing home in Newton Stewart where he died at the age on 89 years in 1996. The instrument was passed onto a friend in Kirckudbright after his death and is still in use there today.

Below is a picture of another  single manual organ, together with speaker, which George built in the 1960's for the Halton Gill Church in Yorkshire. 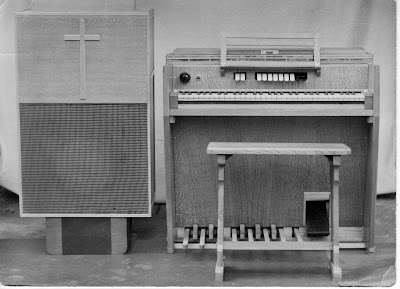 I would like to thank Paul Allen from Oakworth, who was a long time friend of George and Marie's, for providing the information for this article.﻿
Email ThisBlogThis!Share to TwitterShare to FacebookShare to Pinterest

Aw, this was a really nice post. In idea I would like to put in writing like this additionally - taking time and actual effort to make a very good article… but what can I say… I procrastinate alot and by no means seem to get something done.

Is there a more details on this specific?

Wow! Amazing story. Indeed, an amazing man.
I now live in Wigtown's old prison and am delighted to have learned another segment of the building's history.

Hi OPHGREGORY. My name is Jenny. Me and my family viewed Clintz House in 95/96 but due to the property being in a bit of a state we settled on a little village called Creetown. Would love to know if you still live there? Live in Scarborough North Yorks. I know this is random, it would be great to hear from you. The property was magical and i often wonder if anyone made it into a family home. Thank you. Regards Jenny.